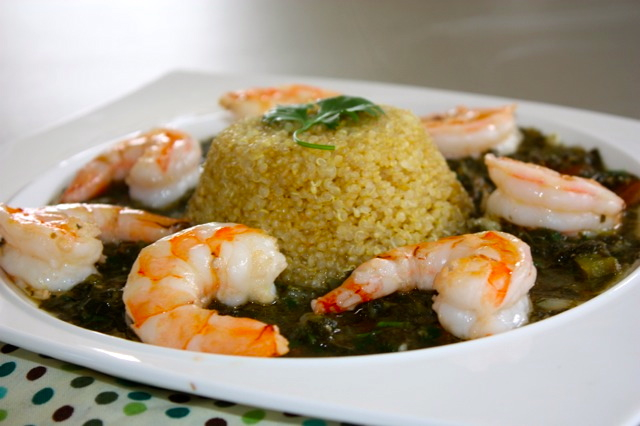 This recipe is neither French nor Italian but Middle Eastern. I first tasted molokhia when I lived in London at a Palestinian lady’s house. My good friend Stephanie and I wanted to learn English so in our 20′s we went to live in London (which needless to say was a long time ago!!). We rented two rooms at this wonderful lady’s house who was a writer mostly focusing on women condition in Islamic countries. That was the first time I ever tasted or heard about molokhia. She treated us with chicken molokhia once in a while which was a feast for us. Molokhia is basically the leaves of jute, a green leafy vegetable, a little bitter. Its texture is a little slimy like okra, so if you like okra, you’ll like molokhia.

Then we went back to France, time went by and living in a small town in France, molokhia was nowhere to be found in the markets in France. Not that long ago (about 20 years later), strolling down the frozen section of a middle eastern store in San Francisco, I found frozen molokhia. I could not believe it! Here I am with three bags of frozen molokhia, and no idea on how to prepare it.

After some intense searching, I found various recipes for molokhia, one of which is a Tunisian version and is made out of dry leaves and prepared with lamb and like a thick stew consistency. The one I tasted 20 years ago was made out of fresh leaves, with chicken and with a consistency of a soup and eaten as a soup. I found a recipe from Cairo similar to what I was used to, so Inspired myself from this recipe – It is usually served with rice but I was in the mood for quinoa, and it just works as well.

In a medium pot, heat fish stock, then add frozen molokhia, tomatoes, onions, cumin powder, coriander powder, salt and pepper. Cook for about 20 minutes. Add cilantro. In a pan, add olive oil and garlic and cook until fragrant but don’t burn the garlic. Add to the molokhia pot and cook for a few minutes. In the meantime, saute shrimps and keep warm. Add lemon to molokhia, stir well and serve molokhia with shrimps and rice or quinoa.

This entry was posted by silvia on August 3, 2015 at 3:47 am, and is filed under Fish/Seafood, Soups. Follow any responses to this post through RSS 2.0.You can leave a response or trackback from your own site.