Leeks stuffed Portobello on barley with cream of asparagus 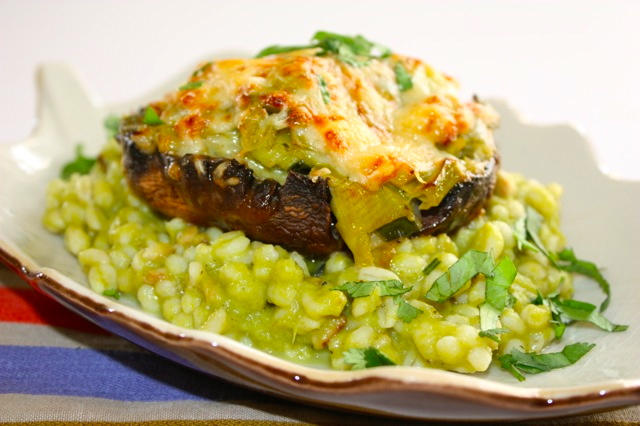 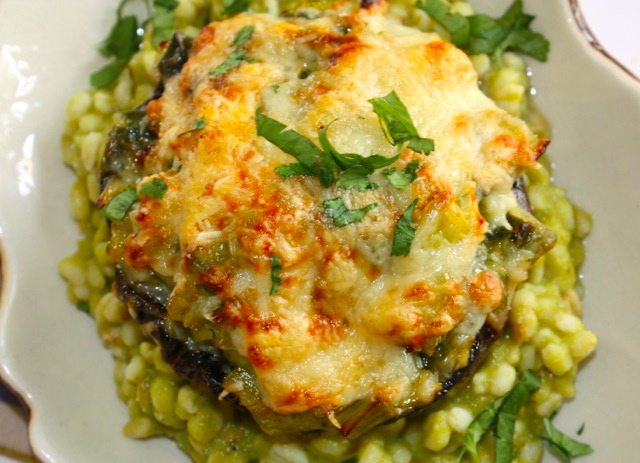 I am always amazed at the delicious dishes you can make with vegetables. I can certainly spend the rest of my life without looking at meat or any dead animal on my plate.

You could of course replace barley with brown rice, farro, quinoa…most of my recipes are versatile and I see them as ideas and suggestions.

In this recipe, I cooked barley in a rice cooker with broth and white wine, somehow like a risotto but not cooked by liquid absorption more like a steamed rice. It’s quite helpful when your time is limited. Of course, the texture is very different, not creamy and more dry, which works perfectly here because I added the cream of asparagus at the end.

Cook barley in a rice cooker with vegetable broth and white wine. The quantities are half each (50% broth, 50% wine). Usually, for liquid quantity vs. grain, I put enough liquid to cover grain + half inch extra liquid on top of the grain.

In a pan, heat olive oil and sweat the shallots until they become soft and translucent. Add leeks and 4 tbs vegetable broth. Cover and let cook at slow heat until the asparagus are soft. Adjust with salt and pepper. Blend in a mixer until the texture becomes smooth and creamy. If it’s too thick add broth.

In a pan, heat olive oil and add garlic. Stir a few minutes until fragrant, then add leeks. Add 2 tbs broth and cover. Let cook at slow heat until the leeks are soft and tender. Adjust with salt and pepper. Add thyme and cream. Let reduce. Remove from heat and set aside.

Sprinkle portobello with olive oil, vinegar, salt and pepper. Broil under broiler for about 5-10 minutes until the mushrooms produce water, but are not mushy. Remove from oven, absorb water with paper towel, and divide the leek mixture on top of each mushroom. Sprinkle with cheese and cook in a pre heated oven at 380F for 15-20 minutes or until mushrooms are golden brown.

Serve mushrooms hot on a bed of barley.

This entry was posted by silvia on March 7, 2014 at 3:36 am, and is filed under Grains, Vegetables, Vegetarian - dairy. Follow any responses to this post through RSS 2.0.You can leave a response or trackback from your own site.