I got my purse stolen – Purses filled with crayfish, leeks and cherry tomatoes, curry cream sauce 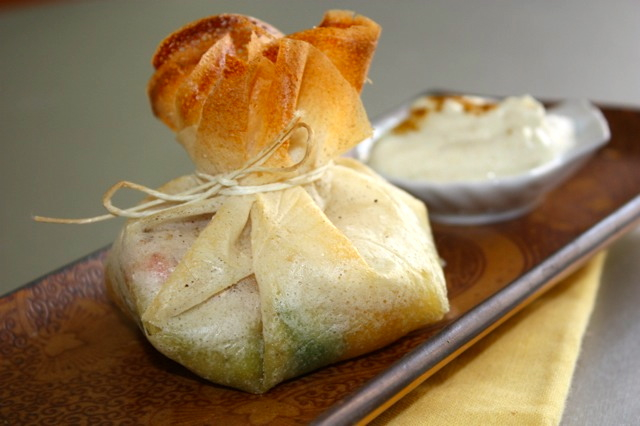 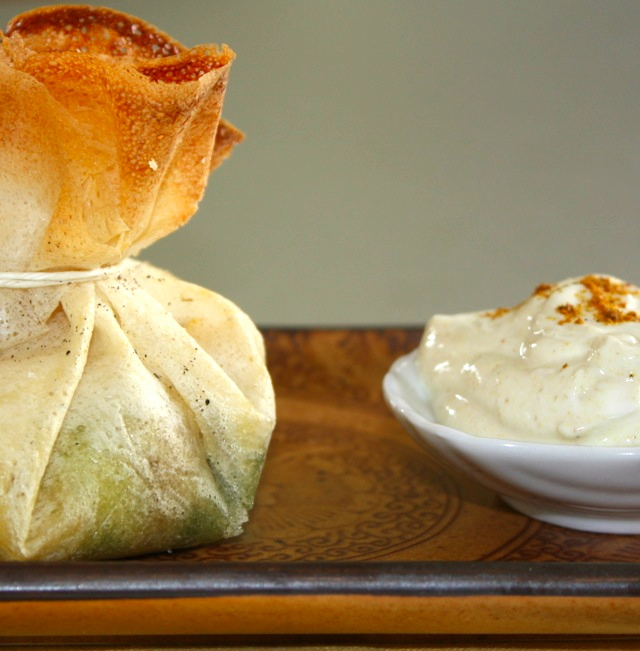 I am back in the US and I did not post anything while in France, simply because I had no time to cook – I think I prepared lunch for my parents twice, the rest of my stay my mom cooked and we had guests so no time to shot anything…and to be honest, I had no motivation to cook. What a shame!!!! I always think, I will have time to shot the old town, la vieille ville or our gorgeous Place Stanislas (the most beautiful square in Europe) painted in gold, or our beautiful architecture. But no, I get there and I get caught in family stuff, my life changes completely, and this time I even left my camera in the suitcase! Oh well, c’est comme ca, et tant pis!

These purses are made with feuilles de brick (also called brick dough or brick pastry in the US) that I bought  while I was in France (they’re more popular over there than filo dough) , they’re mainly used in middle eastern cuisine and really hard to find in the US, so far I have not found yet a store that carry them, except Amazon, but they’re too expensive. I paid only 0.90 Euros for a pack of 10. You can substitute filo dough sheets, but I prefer the texture of feuilles de brick, they’re more resistant and not as fragile.

Aumonières were an old type of purse that people use to carry on their belt so that no one would steal the money. In the food world they refer to any dough (crêpe, filo dough, feuilles de brick) filled with anything, it can be fish, vegetables, meat, etc.. basically it’s a eatable purse filled with food instead of money.

Sometimes I like to substitute crème fraîche with fromage blanc. If you are using fromage blanc instead of the heavy cream for the sauce, you won’t be able to boil it, not cook it, so you’ll have a cold sauce instead of hot. In this case, a hot sauce goes much better with the whole dish since the purses are hot.

You can use shrimps or scallops instead of crayfish, and use your creativity for the filling, it’s all about what you like! 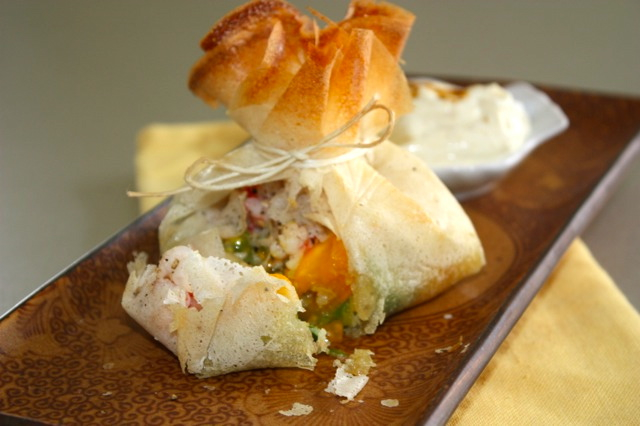 Heat olive oil in a pan. Add leeks and cook until tender. Adjust with salt and pepper. Set aside.

Cut two circles of about 2.5 inches 4 brick sheets. Then take a whole sheet, brush the surface with olive oil, and place two of the small circles in the middle. Divide the leeks in the center of these circles, add six tomato halves on top of the leeks and top it off with the crayfish, Sprinkle with sesame seeds, salt and pepper. Proceed the same way for the other purses.

Close the purses by bringing the sides to the front forming a purse. Tie it up with cooking thread. Bake in a pre heated oven at 370 F for about 15 minutes, make sure the purses don’t burn or become too dark.

For the sauce, bring the cream, lemon juice and curry to a light boil, then add salt and pepper.

Serve the purses hot with the sauce on the side.

This entry was posted by silvia on February 8, 2012 at 5:31 am, and is filed under Fish/Seafood. Follow any responses to this post through RSS 2.0.You can leave a response or trackback from your own site.