Kale is in fashion – Spicy kale and chick peas with tzatziki 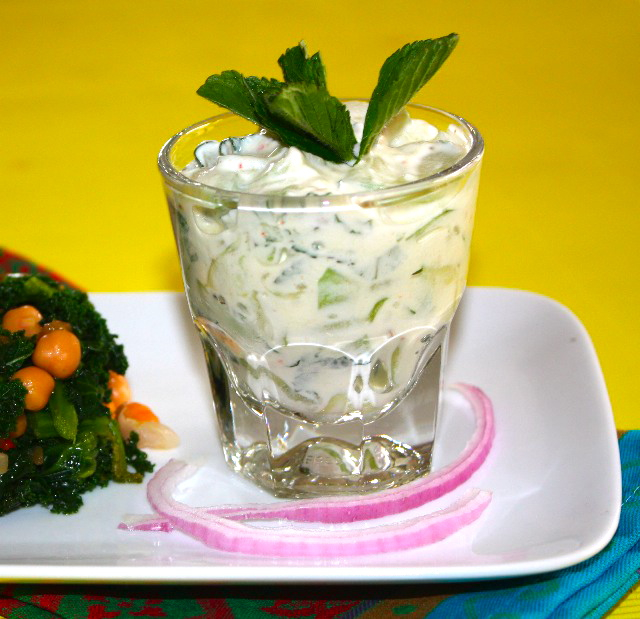 Originally I wanted to keep this vegan, then I could not resist to use that beautiful Greek yogurt I had in the refrigerator. Kale is quite THE popular vegetable these days, at least in California, and everyone talks about its health benefits, and how everyone should use it in its diet. It’s even used in juices along with other fruits and vegetables when doing a detox, I tried it in a “Green juice” and I have to admit that I tasted it and really liked it. It seems like juicing is quite in fashion too in California but its real health benefits have been questioned among experts.

I often ate kale growing up, it was regularly found on our table, since my grandfather grew it in the garden. I consider myself lucky enough that my parents always made me eat what they were eating, and there was no special “meal” for the kids. People might criticize this upbringing, and think it’s a little strict, but in retrospective, I think it helped me to develop a palate and tastes opened to so many different flavors and textures.

Kale and chick peas are a wonderful combination, their respective textures complement each other quite well. Tempeh is also a great alternative to chick peas in this dish.

Tzatziki is always a delicious appetizer dish (or meze), I like to serve it as a side dish sometimes like here, it’s always refreshing. Tzatziki is mainly a Greek specialty but often found in Turkey too. It’s made with goat milk yogurt, thinly sliced cucumbers, olive oil, mint, garlic. I would think that everyone has its own specific recipe. I do not consider myself to be an expert in Greek cuisine, and only been to Greece once, but this version of tzatziki is more than delicious. I will have to go and check at my Greek grocer if he has a family recipe to share with me…but I guess if it’s a family recipe, he won’t.

Ingredients for 2 as a side dish

Bring a pot of salted water to a boil, cook kale for 2 minutes, drain and squeeze excess water.

Warm olive oil in a pan, add onions, stir for a few minutes, then add the rest of the ingredients except for the kale and chick peas. Stir well. Add vegetables and cook until fragrant.

Serve in small plates with tzatziki on the side.

Squeeze extra water using your hands from the cucumber. Add to the yogurt, then add remaining ingredients and let it rest for about 15-30 minutes.

This entry was posted by silvia on March 18, 2011 at 4:11 am, and is filed under Side Dish, Vegan, Vegetables, Vegetarian - dairy. Follow any responses to this post through RSS 2.0.You can leave a response or trackback from your own site.