In France and mainly in the Eastern part of France, in a region called Alsace, which is bordering Germany, they make wonderful gâteaux and tartes au fromage blanc. They have their own version in Germany called käsekuchen, which is similar. It’s made with Quark which is a fresh cheese slightly different from fromage blanc because of its thicker texture. I made a more traditional version here, which has a crust, so that would be called a tart instead of cake. This version is lighter, because I only used egg whites, no cream and no crust, so this very light cake would fit in the “diététique” section. 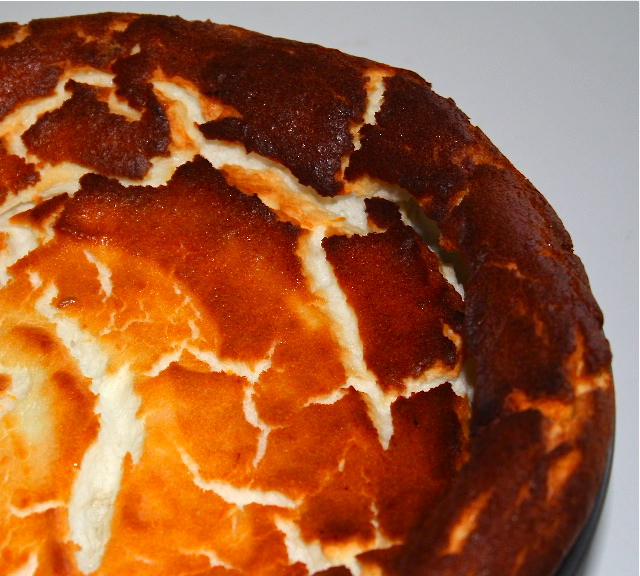 I had extra egg whites when I made palets bretons that I didn’t want to throw away. I was thinking first to make meringue, but since I am not a big fan of crunchy and extra sweet egg whites, the use of eggs whites was perfect here. Of course, you could use yolks if you wanted to, and of course there are different recipes for this wonderful gâteau au fromage blanc, and this is only one light version of it.

Since we are in America, domestic fromage blanc is not easy to find, so I used Fage Greek yogurt and it worked perfectly. You don’t have to feel guilty about having dessert after a meal, because this is will not make you feel heavy, but simply happy and satisfied.

I used Meyer lemons for a stronger lemon flavor, but that’s not really necessary, regular lemons work perfectly fine and would fit better here because it does take over the tanginess of the fromage blanc. If you want to compare this to an American dessert, it would be a very light and extended cousin of cheesecake. You can serve it with any coulis you like such as raspberries, fresh blackberries, etc…but when in season peaches and apricots would be a wonderful alternative.

For the raspberry sauce

In a mixing container, mix yogurt, sugar, flour and lemon zest. Beat egg whites to a stiff consistency and add to the mixture. Grease with butter a deep dish pan. Pour carefully the mixture and cook in a pre-heated oven at 355-360F for about one hour. If the center of the cake looks a little pale while the borders are golden, decrease temperature. When cooked remove from oven and turn upside down, let it cool that way. Then turn cut and enjoy.

For the strawberry sauce

Cut strawberries, mix with sugar, orange juice, vanilla extract and cook for about 15 minutes. Let it cool and blend. You can pass the sauce through a sieve to remove strawberry seeds and make the sauce gets smooth.

This entry was posted by silvia on February 28, 2011 at 5:28 am, and is filed under Desserts. Follow any responses to this post through RSS 2.0.You can leave a response or trackback from your own site.