« Do you know how to play the guitar? – Farro Spaghetti “alla chitarra” with vegetable ragù and ricotta
For pineapple lovers – Coconut-pineapple yogurt bouchées with pineapple-rum compote »

Are you ready for summer? – Ricotta terrine with roasted peppers and mint 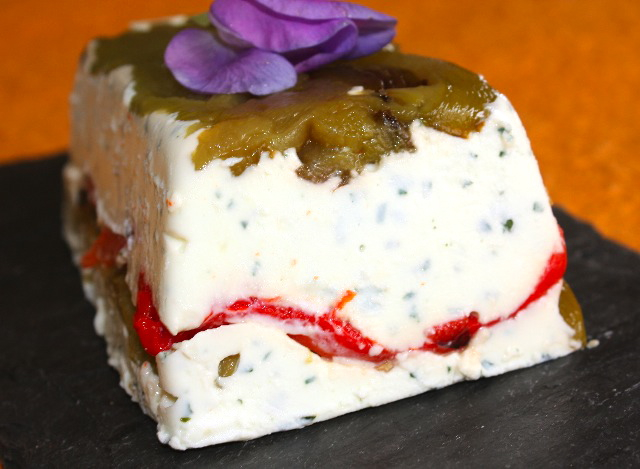 I wanted to feature a vegetarian terrine for those interested in a new and French cuisine and demystify the world of French food and some wrong concepts associated with it. When talking about terrines, usually we tend to think about meat or fish dishes such as duck terrine, rabbit or game terrines that are part of the French culinary traditions, which are the most common types of terrines…Like many other traditional dishes, terrines can take a wonderful light and fresh twist.

Yes there was a time, when French food was considered heavy and rich with the use of butter and creams, game and lots of animal products. There is still this side of French food if you go to France and want to explore traditions but for those interested in a lighter and more health conscious French cuisine, we do have a lot of wonderful restaurant, trends and recipes that emphasize on a nouvelle cuisine.

This particular cuisine among the best chefs (even the traditional ones) has emerged, fresher, healthier and lighter in many aspects, a more modern and contemporary cuisine, based on fresh ingredients and flavors. That’s what I am interested in bringing to people’s attention with this dish.

I had a lot of ricotta left so what’s a better use of it than in this terrine? It’s delightful with a green salad, served with toasted country bread, or as a buffet item, it’s light, fresh and flavorful, combining Mediterranean flavors.

I used a mini loaf pan for this terrine, so usually it’s enough for 3 people, and I serve two slices each. You can adapt ingredient quantity accordingly if you want to make one regular size terrine for a buffet. This is a very easy terrine to prepare and that does not require extra culinary skills or experience.

For a terrine for 3

Roast peppers by putting them under broiler until their skin turns black. Remove from the oven, place in a plastic container and let them cool. Remove skin and seeds. Cut in strips.

Soak gelatin sheets or agar agar in cold water, then dissolve in a little hot water. Add to the ricotta mixture.

Refrigerate for at least six hours or overnight.

Carefully remove from the mold and cut in slices. Serve with toasted country bread.

This entry was posted by silvia on May 25, 2010 at 10:36 pm, and is filed under Appetizers, Vegetarian - dairy. Follow any responses to this post through RSS 2.0.You can leave a response or trackback from your own site.