Who's in for okra? – Spicy okra, green beans and shrimp stew 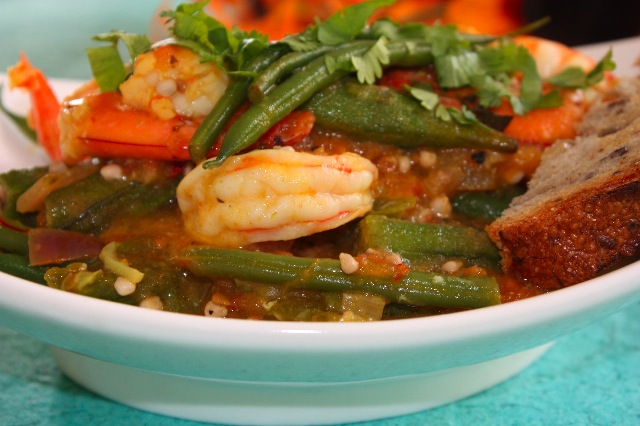 What’s up with okra? My feeling is that very few people like it. Now, I have to admit that I never cooked okra before, and always ate it at my Indian friend’s house…I never was motivated to buy it and found other vegetables I was more attracted to, mostly because, anyone who is talking about okra doesn’t seem to like it, due to its sliminess, so I was not really convinced it was worth it.

After seeing a beautiful picture of a okra and anchovy dish on Mary’s site, I changed my mind and attempted a little experiment. I loved Mary’s recipe, but obviously I will leave to her, the Asian techniques, recipes and flavors, since I am no expert in Asian cuisine, but will definitely try out her recipe once I find those tiny anchovies.

Okra is popular in Moroccan cuisine and West African lands, so I figured I would go that route, and spice it up in some tomato base, shrimps and add green beans to the mixture. It is indeed slimy so, you should know that before you prepare it and before you eat it, not everyone likes that particular texture.

If you want to decrease its sliminess you need to leave it whole and stir fry it quickly. In case you would prefer a vegan version, just substitute potatoes to the shrimps and it will be nonetheless delicious. Any rice or grain would be a perfect accompaniment, I served it with toasted walnut bread and garlic et c’était bien bon, and the whole dish was really delicious! Now you’ll certainly ask me what’s the greatness of cooking and eating that quite unappealing vegetable? To be quite honest, I like it, the mixture of the tomato base flavored with cumin and saffron, green beans and shrimps made it a delicious and light dish. I liked okra’s flavor, it reminds me of zucchini, so if you are not bothered by its texture, try it out. I am not picky as far as vegetables are concerned and there is not one I don’t eat.

You’ll have to see for yourself if you like it or not. For the sake of at least once cooking it and trying it out, I think it’s worth it. As the French say, Il ne faut as mourir bête! (you don’t want to die stupid, or maybe the word ignorant would be more accurate).

Cut the top part of each okra, cook in salted boiling water for about 5-10 minutes. Drain and set aside. Pre-cook beans the same way, they still need to remain firm.

Heat olive oil in a pot, brown onions with ginger, add garlic at the end to prevent it from burning. Add cumin, chili flakes and saffron, stir well to get the flavors out, then add tomatoes and broth.

Let the tomatoes cook and reduce (about 15 minutes) at medium heat.

Add okra and green beans, let it cook for about 10 minutes. Add shrimps, and let the stew cook for another 10 minutes.

Sprinkle with cilantro, and serve hot.

This entry was posted by silvia on March 25, 2010 at 8:29 am, and is filed under Fish/Seafood. Follow any responses to this post through RSS 2.0.You can leave a response or trackback from your own site.