Duo of mousses – Yogurt mousse with rhubarb and peaches 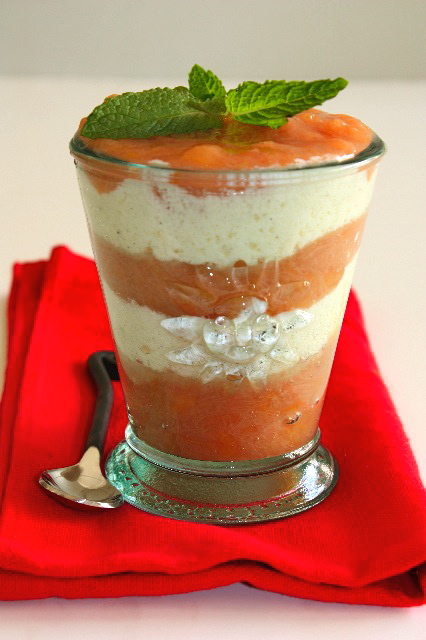 Rhubarb has been on the shelves lately and it has been a while I since used it, so this rhubarb post was overdue.

Rhubarb is often associated with strawberries, but it does make delicious desserts combined with peaches as well. Obviously the final color of the mousse is not as pink as with strawberries, it’s more of an orange pastel tone that looks quite summery.

I don’t know how rhubarb is used in the US, but in France we use it in tarts, and tarte à la rhubarbe is a famous dessert specialty. You have those who love it and those who hate it, so for a long time, I hated it, my childhood friend’s mom always gave us some rhubarb tart, and I could not stand the taste of that long stem which to me tasted like celery. Over the years, I developed a taste for it, and now I love it in compotes mixed with other summery fruits.

Technically rhubarb is a vegetable and is a cousin of sorrel so it can be prepared in savory dishes such as salmon and meat stews.

Rhubarb you can find in the US is different from the one grown in Europe but has a similar taste, it’s a lot redder, so basically the color changes but not the flavor.

I like to use fromage blanc (white cheese and I am not sure what it would be called in English) but it’s a fresh cheese often eaten with sugar or fruits, but also popular savory mixed with chives and other herbs. I love to use fromage blanc in those types of desserts, but it’s not easy to find in the US, so I substituted with Greek yogurt which has a similar texture and it worked fine.

*If you are using agar agar (the vegan jellying substance) it needs to be dissolved in liquid before using, then it needs to cook in the mixture for a few minutes. If using gelatin sheets, soften it in cold water then add the the hot mixture but does not need to boil like agar agar.

For the rhubarb mousse

For the yogurt mousse

In a large pot, mix rhubarb, peaches and sugar and cook at low heat until the mixture turns soft and is cooked. Remove from heat and mash with a potato masher. Add orange blossom water. While the fruit mixture is still hot, add gelatin* see above for agar agar or gelatin use.

Let the mixture cool and place in the refrigerator until it hardens a little.

For the yogurt mousse, mix yolks and sugar and beat until the mixture whitens and doubles volume. Add yogurt of fromage blanc carefully. Beat whites and add to the yolks. Whip the cream and add to mixture carefully.

Place in individual cups and alternate one layer of rhubarb/peach mousse and yogurt mousse. Place in the refrigerator for one hour before serving.

This entry was posted by silvia on March 31, 2010 at 10:07 pm, and is filed under Desserts. Follow any responses to this post through RSS 2.0.You can leave a response or trackback from your own site.