« Tel Aviv lentil salad – Lentil and beet salad with arugula, feta and mint
One spoon for me and two for you – Scallops with mango and blood orange vinaigrette »

Gratin with a twist not Dauphinois! – Potato, zucchini and roquefort gratin 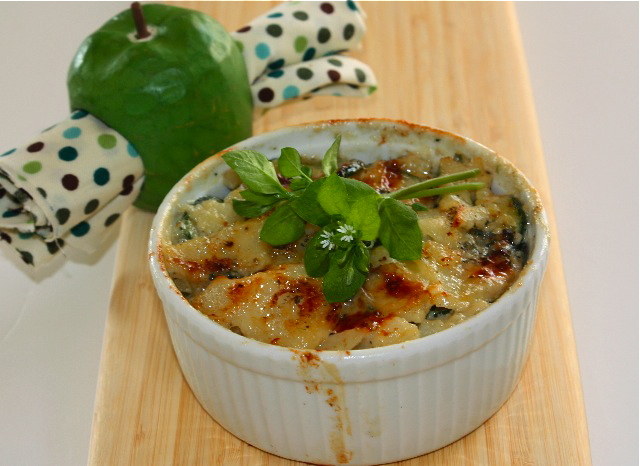 There is the traditional gratin Dauphinois (from the Dauphiné region) where the potatoes are cooked in milk, then placed in the oven with butter (NO cheese) the real gratin Dauphinois has no cheese! Even though most people add cheese, the purists will scream and pull their hair when hearing a gratin Dauphinois recipe with cheese, then you have to remove the “dauphinois” in front of the “gratin” to be accurate. I tend to be lenient as far as cuisine is concerned but I really don’t like to give a inaccurate name to a recipe. It’s like people calling me Cynthia instead of Silvia (which they often do).

Then you have less traditional gratins like this one, very delicious but with Roquefort cheese and other additions of vegetables such as mushrooms, etc… This is a one meal dish and perfect with a green salad but I would not call it a light dish due to the potato-cheese content. It should probably be listed on the category “comfort food” to use the American terminology, even though I don’t like the idea that food can be comforting, I would prefer to use the word “simple” instead. I would call a friend “comforting” but not food. Eating too much heavy food, does not leave me comforted, rather the opposite.

You need to slice the potatoes very thin with a mandoline otherwise it takes a little too long to cook them especially if you are using a large dish instead of small individual ramequins. You could also avoid the pre-cooking process of the potatoes, then the cooking time needs to be increased at low temperature. When pre-cooking the potatoes in milk, make sure not to overcook them, and you need a kind that will remain firm, otherwise the potatoes will break and become mushy.

Add potatoes in a pot and pour enough milk to cover the potatoes, let cook for about 5 minutes but still need to be firm. Add zucchini and cook for another 3 minutes. Remove from stove and drain. Place potatoes/zucchini in a deep dish and add salt and pepper.

In a bowl combine Roquefort cheese, yogurt and cream, thyme. Adjust with salt and pepper. Roquefort is somehow salty, taste the mixture before add extra salt.

In ramequins place some potatoes/zucchini, then add 1 tbs of Roquefort/cream mixture, proceed with another layer of potatoes and top with Roquefort mixture.

Cook in a pre-heated oven at 375F for about 20-25 minutes or until golden brown and potatoes cooked all the way through.

This entry was posted by silvia on February 4, 2010 at 9:23 am, and is filed under Appetizers, Side Dish, Vegetarian - dairy. Follow any responses to this post through RSS 2.0.You can leave a response or trackback from your own site.