Two friends in a pan – Radicchio and artichoke casserole 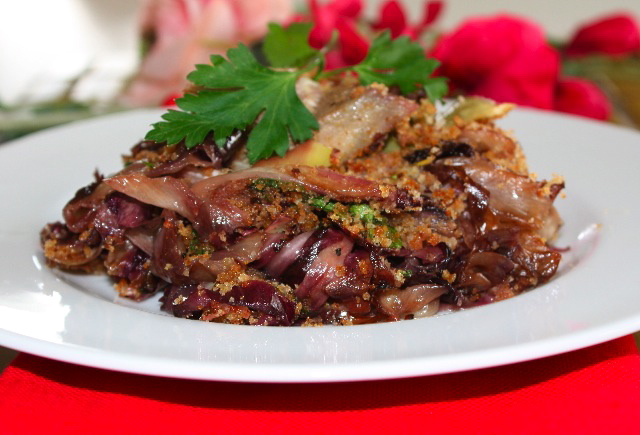 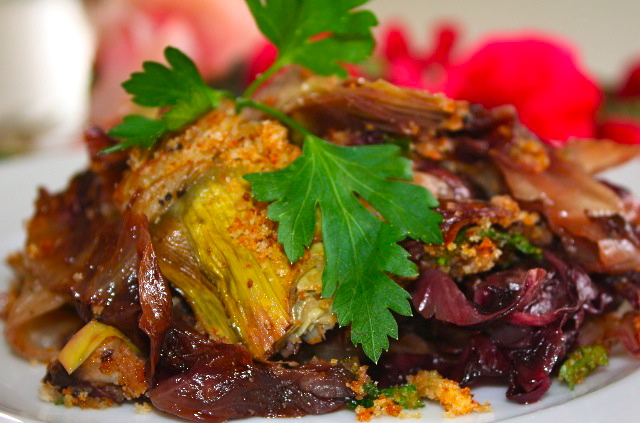 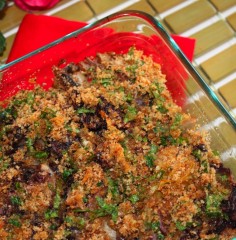 Radicchio al forno is a typical Northern Italian dish. I somehow added a little touch to it, by adding artichokes and topping it all with breadcrumbs, garlic and parsley. Artichokes and radicchio go perfectly well together, the sweetness of the artichoke blends beautifully with the bitterness of radicchio, and you get a wonderful side dish, or if you’re like me, just forget the “side” it’s just a dish in itself since I can eat the whole plate.

There are many different types of radicchio, the round and red one like this one is called radicchio di Chioggia which is mainly grown all year around. My parents would grow the green kind with long leaves that was really bitter much bitter than this one, and my mom made it with anchovies and garlic as a salad and even as a young child, I loved it. The bitter, the better. No wonder why I love Fernet, Cynar and anything that has a bitter taste.

Our neighbor when I was growing up was from Udine (Friuli region), Giovanni drove a Vespa and was speaking so so loud that we would wake up the whole neighborhood with his loud voice and Vespa honks, everyone called him “petrolette” because of his “honk honk”. Such a funny and sweet character with a huge heart and a terrible French. His French was terrible, and his Italian too, since he spoke mainly Friulan dialect, so even my parents had a tough time understanding him. Every Sunday, he would bring us so many bags of radicchio from his garden. Friulans eat an incredible amount of radicchio, it’s hard to keep up with them unless you’re a rabbit! 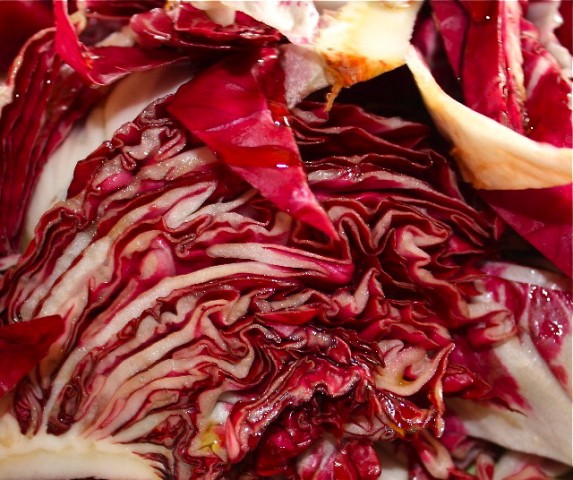 He moved back to Friuli with his wife when he retired, he must be around 80 now and anytime we go visit him, radicchio is always on the table twice a day and seven days a week. Let’s not forget the white polenta sliced and eaten along salame e radicchio!

First start trimming the artichokes. Remove the tough green leaves, the with a knife, trim to top of the leaves and cut the green part around the bottom, close to the stem. You can either slice them if you are using the medium ones, or cut them in half if using the baby ones. Place in a bowl of water with the juice of one lemon, which will prevent the artichokes from discoloring.

Cut radicchio in half, then in slices of about 1 inch think.

In a pan, heat olive oil, crush one garlic clove and let the flavors out. Drain artichokes and add to the pan, stir for a few minutes, then add wine. Add salt and pepper and cover with a lid. Cook at medium heat until the wine has evaporated and the artichokes are cooked all the way through.

Add salt, pepper to the radicchio slices, and drizzle with olive oil. Grill in a grill pan, until radicchio changes color and is cooked but not mushy.

Place radicchio/artichokes mixture in a oven dish and top with breadcrumb mixture. Cook in a pre-heated oven at 375F for about 20 minutes or until the top is golden brown.

This entry was posted by silvia on December 13, 2009 at 10:24 pm, and is filed under Side Dish, Vegan, Vegetables. Follow any responses to this post through RSS 2.0.You can leave a response or trackback from your own site.