Is it really Israeli? – Israeli couscous with curry vegetables 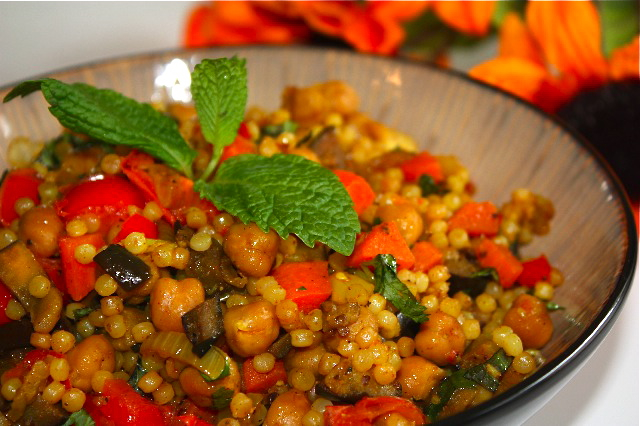 I discovered this type of couscous in the US. I had never seen it before, so I started experimenting with it when I had some Israeli clients. I was so happy I found something “Israeli” to cook for them, but when they told me it was not Israeli, I was somehow confused and disappointed. I had no idea about what Israeli cuisine tasted like, I thought due to their geographical location it would have some Middle Eastern flair. In Paris, in the Marais quarter, the historic Jewish area has one of the most popular Felafel joint, called “L’As du Felafel”, so I my mind Felafel and spicy food was common in Israel and I figured that something called “Israeli” should at least be coming from Israel. Apparently not. It’s like the French manicure of French cleaner, not sure why they call it French but we are no specialists in nails nor cleaning!

So Israeli or not Israeli, I like this couscous variety, it’s fun to prepare and great to eat. Couscous is consumed in all Middle East, so I guess it must be coming from that side of the continent. In France it’s called Matfoul which I think is its original Arabic name. I am not Jewish and obviously not kosher but maybe in my previous life I was. I started cooking by not mixing dairy and meat and I have to say that I like it.

This is a great side dish that can be an alternative to rice, or some other carbohydrate dishes. I like to spice it up a little with curry and spices and add vegetables to it, to make it a little more exciting. I have a few cookbooks about Jewish cuisine and I like the simplicity of the recipes and influences coming from so many different countries. 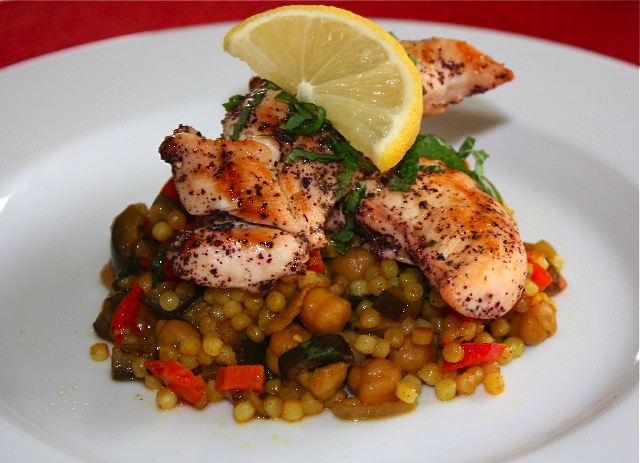 I certainly know that this blog lacks meat recipes but I think the most important thing is to enjoy and take pleasure in whatever you do, cook or eat, no matter what it is. Otherwise there is no point in posting something just for the sake of posting it. I usually serve this couscous with sumac chicken tenders, that has been one of my most requested dish in the “Middle Eastern” category.

Ingredients for 3-4 as a side dish

First start cooking couscous. Heat olive oil in a pot, add couscous and let it brown and get coated by olive oil like you would proceed for a risotto. Add broth and cook until couscous is tender but not too soft. Drain and set aside.

This entry was posted by silvia on December 17, 2009 at 3:23 pm, and is filed under Grains, Side Dish, Vegan. Follow any responses to this post through RSS 2.0.You can leave a response or trackback from your own site.