Where are your roots? – Root vegetable soup with turnip chips and tarragon cream 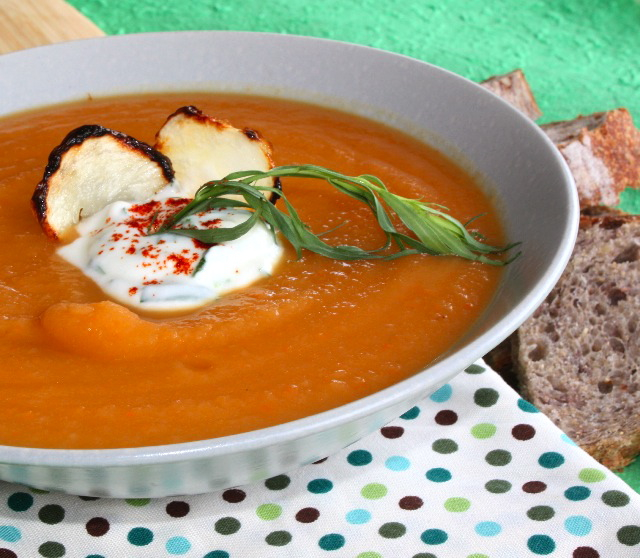 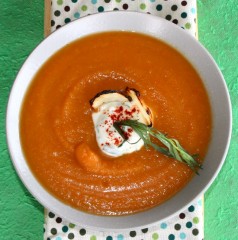 I got a little sick this weekend, another weird migraine that made me drained, so anytime I get sick, I like to eat soups…I know I made one not that long ago, but when I feel sick, soups are great to get re-hydrated and they seem to coat my stomach very nicely. Do I sound like a grandma? maybe. I haven’t made that root vegetable soup for a long time, and had everything in the refrigerator to make one…so here we go grandma started to peel the vegetables and the soup was on its way.

I love root vegetables in so many ways, and in a soups, they’re delicious. All those flavors are combined together to make a smooth and velvety purée. Rutabaga had a bad reputation in Europe especially among people who went through the second world war, since it was the only vegetable they could find during that time. It’s basically an hybrid vegetable that was produced due to the “hybridisation” of a turnip and a cabbage.

My mom adores to puré her vegetable soup and anytime I go home, there is a huge pot filled with some kind of colorful soup for dinner, we rarely have heavy dinners… I am so spoiled that I turn into a brat, a real “bratty” brat…that would be me, la fille indigne (the unworthy daughter) instead of eating her soup, I make the “Maggi” soup called Sveltesse 0% that is an dehydrated soup with 50 calories per bag. You just pour boiling water on top et voilà! you have a quick soup with 50 calories that tastes good (for a dehydrated soup, it does). I have no idea why, or how…I never eat any kind of that stuff, ever, but for whatever unexplained reason, when I am home, I like the Sveltesse soups. Of course, I get the annoyed stare from my mom, who got somehow used to it, but cannot help to give me the look.

I think we all have our “devil food“, and I admit it with no shame, that Sveltesse 0% is my little devil soup, well at least it’s not some heavy chocolate cake filled with butter and corn syrup.

I never eat that kind of thing here, when I go home, I rarely cook, since two cooks in the kitchen are too many, then I break the habits, all habits. I even turn into a meat eater, not that much but I eat prosciutto, and salami. Something I rarely do here. When you change environment, I think you tend to change your habits also, and adapt to the local way of living..if you don’t, it can be a nightmare.

The little twist of the soup is the cream of tarragon, and turnip chip…the turnip chip looks like one but is not fried, it’s just cooked in the oven.

When vegetable are cooked, mix with a hand blender or mixer. Adjust salt and pepper and serve with a tsp of cream of tarragon and 2 turnip chips.

For the turnip chips

Slice the turnips about 2mm slice. Boil in water for a 5 minutes. Drain and pat dry, then place in the oven and let it dry, sprinkle with olive oil and salt. Let it dry some more until the chip is crunchy.

This entry was posted by silvia on October 19, 2009 at 10:02 pm, and is filed under Soups. Follow any responses to this post through RSS 2.0.You can leave a response or trackback from your own site.