« A thought for my best friend – Cake of the crumb fairy for Chantal
Pretty Madeleine and Stanislas – Savory madeleines with oregano, gruyère and olives » 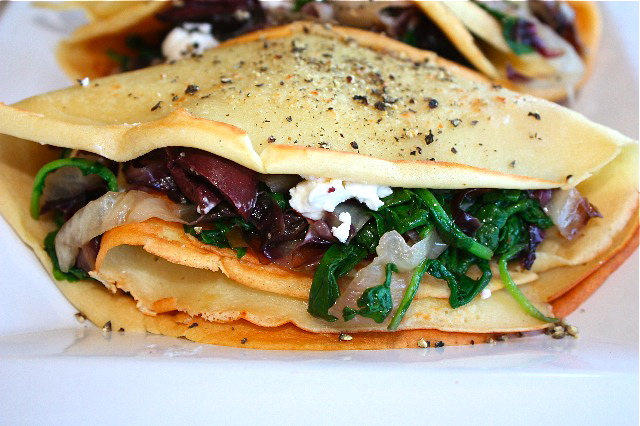 It looks like a crêpe, but is not one. It’s made out of chick pea flour and quite a popular little snack in the South of France. Actually there is an Italian version of it called “Farinata” or “Cecina”  (ceci = chick peas) and eaten in the bordering regions of Nice. I think Socca came originally from Italy and was spread out in the South of France. Chick pea flour is used a lot in Middle Eastern cuisine and probably was introduced to Southern Europe during Arabic invasions…

There are different versions of it, actually the traditional one has only chick pea flour, no egg, no milk and is cooked in the oven. I adjusted mine a little, I placed it in the oven after I stuffed it. The real socca Niçoise is served with just cracked pepper and has to be eaten very hot, or it tends to harden quickly. Street vendors do sell it and it’s mainly eaten on the spot. I somehow like its texture, it’s softer and a little thicker than a crepe but the chick pea flour gives a specific unusual flavor. My version is a little different from the traditional socca, I combined two flours and I stuffed it. You can serve this socca with a tomato concassée (concassée de tomates). Also, you can use spinach, chards, and other types of greens, but I like the rucola because of its peppery taste, it goes perfectly with chick pea sweet flavor.

Actually, I don’t know the South of France that well (been there twice), since we always went to Italy visit the family during Easter, Summer and Christmas. My parents never went anywhere else on vacation, only to their hometown in Italy and at some point, I really wanted to visit other cities, but that was not an option, so I am much more familiar with Italian cuisine, Marchiggiano style than traditional Southern French cuisine.

Besides anytime, my mom wanted to go home, she always used all kinds of excuses, nonno Bruno being sick, zio Tonino being depressed with some kind of unexplained disease, freshen up the house, etc…so whatever reason was good to take a trip to Isola di Fano (her village). Besides Nancy-Isola is only 9-10 hour drive, so not that big of a deal. You can hop on the car, cross Switzerland and get to Italy (mainly in Chiasso, the Italian Border) in about 5 hours.

The thing is with my dad, he hates stopping when he goes from point A to point B, so he would drive non-stop from Nancy to Isola (about 1000 km) and was not happy to let the girls out not even for the “pause pipi“  Peepee break?  and would tell us, not to think about it, as if you stop thinking you want to urinate, then everything is fine, the urge is gone. Yes, my father has always been a character…

Mix the two flours together. Add egg and gradually milk, water and olive oil. If the batter is too thick add water. Add salt and mix well to obtain a creamy and smooth consistency. Set aside.

In the meantime, prepare the greens. In a pan, heat olive oil chopped garlic. Let the flavor of the garlic come out without burning it, then add greens. Adjust with salt and pepper, and stir to wilt them (about 5 minutes), when cooked, set aside and keep warm.

Heat olive oil in a pan, add one small ladle of batter and proceed like you would for a crepe, spreading the batter all over the pan and evenly spread it. Cook and turn on the other side. Proceed the same way until all the batter has been used.

Fill half of the socca with some greens, goat cheese and olives, fold the other half on top and fold once more in a quarter, in order to have a little triangle. Place in a pre-heated oven at 380F for 5-7 minutes. Crack a good quantity of black pepper on top. You can serve this with a tomato concassée.

This entry was posted by silvia on September 19, 2009 at 11:25 pm, and is filed under Appetizers, Vegetarian - dairy. Follow any responses to this post through RSS 2.0.You can leave a response or trackback from your own site.