« Vegetables inside and out – Carrot tagliolini with zucchini-walnut pesto
A little tradition doesn't hurt… – Scallops in their "shells" with mussels, shrimps and cod with leeks and Cognac sauce »

That’s not for Pépito! – Green tea, coconut, and almond bouchées 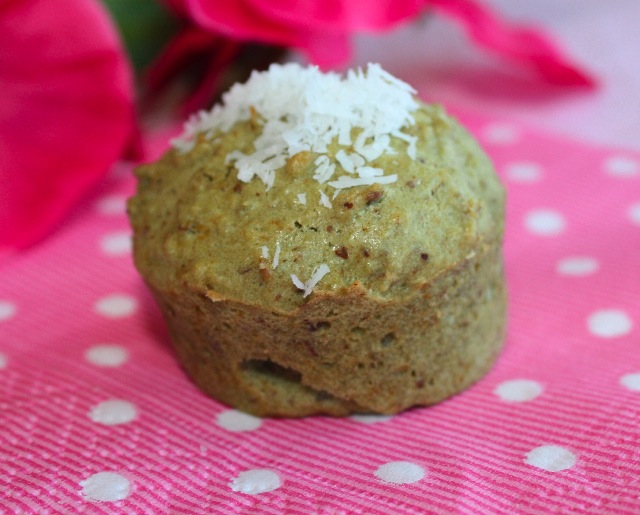 I just adopted the most adorable white parakeet and named him Pépito (named after some chocolate cookies in France when I was growing up called Pépito, they were cookies covered with milk chocolate and all the kids were going crazy for them)…so Pépito must have flown away from a cage somewhere and ended up on my stairs, good thing I found him….because he could have been the happy breakfast of the neighbor’s cat! So here it is, Pépito has been adopted.

I was reading that those little birds need a quite balanced diet, not only made out of seeds but also with vegetables, fruits, greens and other type of food humans eat. He eats from my hands now, and sits on my finger, but he is still afraid, if I move to quickly, he freaks out and flies away. So I happily got up this morning and prepared him a nice mixture of honey, corn flakes, cinnamon, peach, sesame seeds and millet…he stared at it for a while but did not touch it. I tried to made him accustomed to that mixture but nothing worked, so I gave up and was trying to find on the web what do those birds like, other than millet seeds. It seems like they love a bunch of mixtures, but apparently not mine.

So in the middle of my parakeet menu thoughts, I decided to make something for my tea time, and went for those green tea bouchées. Bouchée means morsel, those are so small that they can fit in any size mouth. I will share them with Pépito, if he ever decide to stick his beak in there, but I doubt it.

I don’t know why I am not crazy for green tea as a drink, I know it’s full of anti-oxydants but I its bitter flavor in the drink bothers me, but I love green tea flavor in desserts. Matcha green tea has been quite popular in France recently, probably because Japanese cuisine has been on the top of the trend for restaurants. Paris has tons of them now (something never thought of 10 years ago) and even Nancy my home town which is a town of about 300,000 inhabitants has three of them! the French are not too keen on raw fish, so I am stunned they’re starting to go crazy for Japanese food.

Those bouchées are great with a cup of strawberries and cream, with some mint tea, or just as is. They’re easy to prepare and to bake, overall time is 25 min!

Cut butter in pieces and melt butter slowly in a small pan. Do not melt until the butter turns brown.

Place in individual mini molds (I used silicon molds, that I can’t get enough of) and bake for about 15 minutes, check to see if they’re cooked around that time and continue baking if they’re not cooked in the middle.

This entry was posted by silvia on August 26, 2009 at 11:20 pm, and is filed under Breakfast/Brunch, Desserts. Follow any responses to this post through RSS 2.0.You can leave a response or trackback from your own site.