« We want it curly and tasty – kamut spirals with olive pesto and grilled zucchini
Caponata, we know it’s you – An eggplant caponata a little different »

The fake tartine – Potato tartine with mushrooms and leeks, topped with fontina cheese 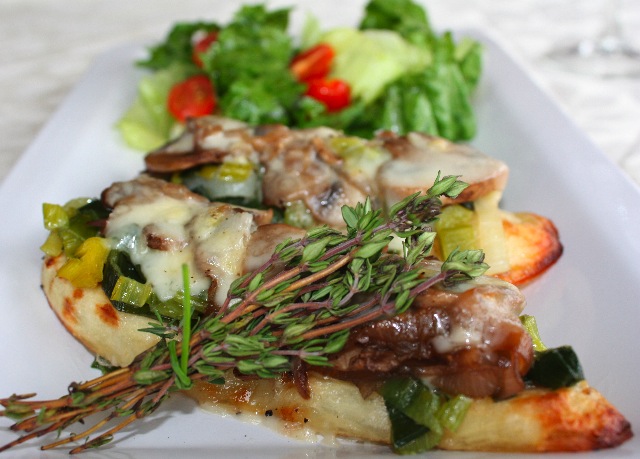 Another one of those words that will be tough to translate…what is a tartine? A toast? When we talk about tartine, we think baguette or pain de campagne (country bread), so it’s a slice of bread where you spread a paste, butter, pathe, etc…but that would not work on American bread. We would call that a toast.

Instead of using bread, I am using a huge slice of potato which works perfectly. What’s better than leeks, mushrooms and cheese with a potato? I love this tartine for a light meal, with a nice crunchy green salad.

I used the Italian cheese Fontina, made from cow milk and produced in Val d’Aosta region, this cheese has a very particular and smooth flavor, due to the climate of its region (dry in summer since it’s close to the Alps) and the mountain grass and flowers cows are eating. In the US, you can find all kinds of fontina (I have even seen a Danish one) but I always go with the imported kind, which melts in your mouth and deliciously soft.

Since we are in the world of tartines, if you live in the Bay Area, are very patient and love French country bread, go try some bread at Tartine Bakery, so you can make your own. The bakery is great, the only thing that could be annoying is the waiting time of over 1/2 hour on the sidewalk with the rest of the 50 people waiting to be served. If you have time, are in the neighborhood, try it out.

Peal the potato, and cut lengthwise  in about 1/2 inch think. Add olive oil, vinegar salt and pepper. Cook in the broiler at medium heat, nicely brown both sides and cook all the way through.

Wash mushrooms, slice them and saute in olive oil until the mushrooms are cooked. Set aside.

Wash leeks, cut crosswise, and cook at medium heat in olive oil in the same pan you cooked the mushrooms. Cover and let leeks become soft, about 15 minutes. Set aside.

Slice the onions, and saute in olive oil, at high heat, until the onion become brown, then decrease heat, cover and let it cook slowly. At the end, sprinkle with a little sugar, let it caramelized, then add vinegar.

Take a slice of potato, top with leeks, mushrooms, onions, and fontina cheese, add salt and pepper and place in the oven until the fontina is melted for about 1 minute. Fontina cheese mets quickly, keep an eye on the tartine.

This entry was posted by silvia on May 18, 2009 at 7:08 pm, and is filed under Vegetables, Vegetarian - dairy. Follow any responses to this post through RSS 2.0.You can leave a response or trackback from your own site.