« Tea in a muffin cup – Earl grey muffins with candied orange
A little craving for quinoa – Spicy quinoa with asparagus, peas and carrots »

In between a tart and a pizza – Tarpiz with grilled vegetables, feta and rucola 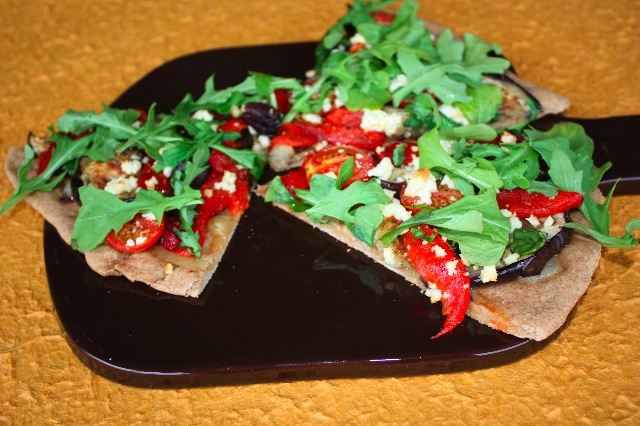 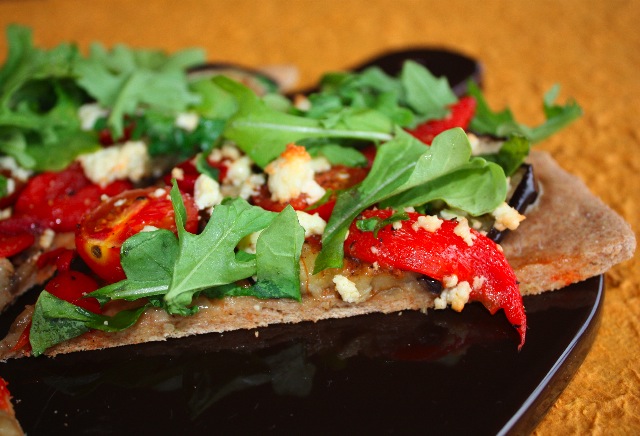 When you can decide what to make between a pizza and a tart, and you end up doing something in between those two, it would be inaccurate to call it either tart or pizza, that’s why it should get its own name. Entre les deux mon coeur balance (in between those two my heart can’t decide), like my heart has been balancing between France and Italy my whole life, so I might as well be a representation of this round and savory Tarpiz…really Tarpiz is really what it is…and I feel I am a Tarpiz myself.

Lately, I have been avoiding to use white refined flours in my pastries or other dishes where it requires flour. I have been going to the Rainbow and buying all those wonderful cereal flours, such as quinoa, kamut, buckwheat, spelt, etc…they’re wonderful for baking, very healthy since high in fibers and protein and most of all they taste absolutely amazing. I definitely stay away from white refined flour when possible.

Our modern society has been consuming too many refined and industrialized food, lacking nutrients and vitamins. We have forgotten natural and ancient grains used in the old time as far as Antiquity, such as spelt, kamut, millet, etc…and really wished that restaurants would also serve food that would be focused on nutrition rather than heavy in grease and sugar to make it more “flavorful”. Flavor is not linked to sugar and grease, but on quality of the ingredients.

Anyway, this Tarpiz is made out of whole wheat and kamut flours, topped with grilled vegetables, and rucola. I love pizza bianca (white pizza) with rucola they serve in Italy.

Mix flours together. Dissolve one tsp of fresh yeast in 1/2 glass of lukewarm water. Stir well until the yeast has completely dissolved. Mix yeast, salt, olive oil with flours, making a dough. Knead the dough to make it into a nice and elastic texture. Let it rise for a couple of hours at medium temperature. It needs to double it size. Then fold again, make a ball, wrap in plastic and leave in the refrigerator for one about one hour.

Broil the bell pepper under the broiler, until all sides are browned. Remove, let it cool and remove the skin and seeds. Cut in stripes.

Cut the eggplant crosswise, sprinkle with salt and olive oil and broil under the broiler on both sides. When nicely browned, cut in half or quarter depending on the size of the eggplant.

Cook the onions slowly in olive oil until they become soft almost like a jam.

This entry was posted by silvia on May 31, 2009 at 8:57 am, and is filed under Appetizers, tarts and pizza, Vegetarian - dairy. Follow any responses to this post through RSS 2.0.You can leave a response or trackback from your own site.