« A taste of Sardinia – Spinach, chick pea and fregola soup
Yes, the apple got stuffed too – Baked apples with apple mousse, ricotta, vanilla topped with honey and nuts » 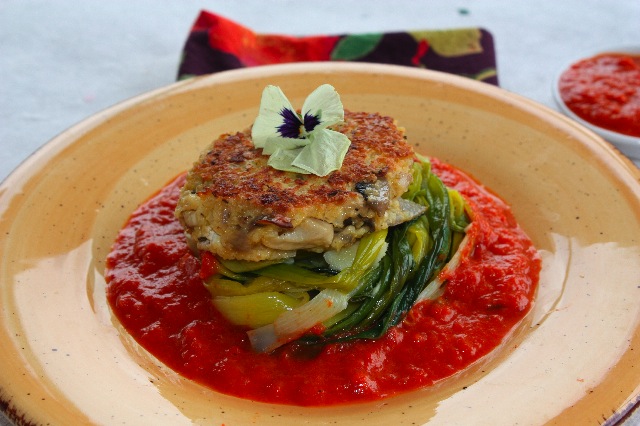 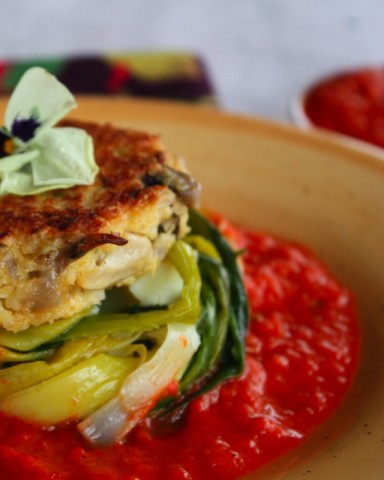 The world of “galette” is infinite. I don’t know exactly how to translate this in English, after searching in my dictionaries and on the web, I got a result of “flat cookie” which is not correct. Maybe the closest I would think would be “fritter”, the difference is that galettes are not fried. It’s shaped like a pancake, cooked like a pancake, flat but thicker and smaller and is not made with a batter. They’re ideal for side dishes, light meals, appetizers, finger food, etc… with a dipping sauce or even without.  Those ones have grains and vegetables and are enhanced oat cheese. You can make “galettes” with anything you want, mushrooms, leeks, zucchini, quinoa, etc…

As for the “effilochée”, it is another one of those word where there is not literal translation, basically it means that the leeks have been cut lengthwise in long threads. Fil meaning thread. Effiloché refers to fabric when all the threads come apart.

I have decided to use all the grains I have left in the kitchen pantry, all the vegetables in the refrigerator and stop shopping for a while. It’s my week resolution, let’s see if I will be able to keep it. I am just allowed to buy bread and water and maybe…milk…so far so good, but it’s only Tuesday.

I found some millet I bought at the Rainbow a while ago that I used in a taboule-style dish but I was not excited about the result, millet tends to have a sweet flavor and figure I would tempt making something different with it, before coming to the conclusion I don’t like millet…and surprisingly enough, those turned out incredibly delicious and so light.

for the galettes and leek effilochée

For the red pepper coulis

Cook millet in water, like you would for steamed rice. I used my rice cooker, I didn’t feel like going the traditional way. Set aside. In a pan, heat up olive oil, add red onions, cook until onions are translucent about 5-6 minutes. Add mushrooms and cook until water has evaporated. Add mushrooms, egg, thyme, and oats (enough so that the mixture is not too sticky) to millet, then add crumbles goat cheese at the end, mix to form a nice mixture but do not break the goat cheese. Add salt and pepper. Form little round “cakes” and set aside.
Start preparing the coulis. Roast red pepper in the oven using broiler. When the skin has turned a little black and seem roasted, remove from the oven, place in a plastic container to cool down, then remove the skin. cut in small pieces. Put in a blender with all other ingredients and blend until a thick and smooth consistency. Set aside.

Wash leeks very well removing the dirt left inside the leaves. Cut lengthwise so that you’ll get long threads. In a pan, heat up olive oil, and add leeks, salt and pepper. Cover and let cook for about 15 min at medium heat until the leeks are cooked but do not overcook. Add garlic and parsley.

This entry was posted by silvia on March 3, 2009 at 2:54 pm, and is filed under Appetizers, Vegetarian - dairy. Follow any responses to this post through RSS 2.0.You can leave a response or trackback from your own site.