When the moon turns into a fish – Hawaiian opah marinated in coconut curry, banana leaf with forbidden rice and grilled Thai eggplant 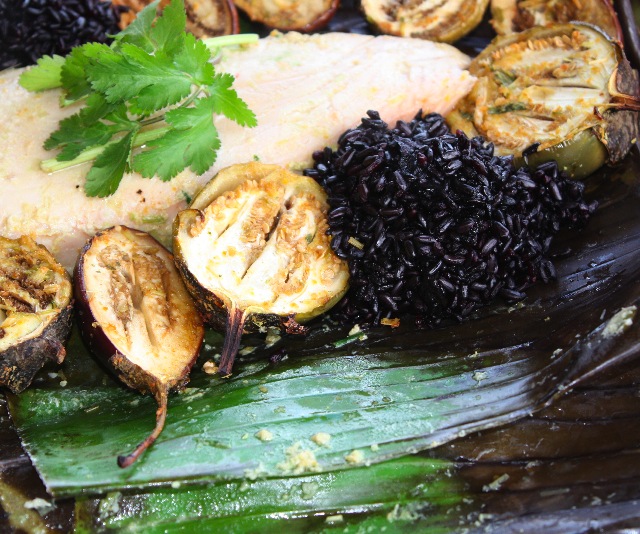 On my trip to Berkeley Bowl, I found those banana leaves (you can find those at any Asian market), and what else goes with banana leaves? fish, right? I rushed to the fish section to figure out what could I put in those beautiful green leaves, they had some quite unusual fish that I had never tasted, such as a few Hawaiian ones. This Opah or also called moonfish was pinky and quite appetizing, my neighbor who lived in Hawaii and was shopping with me, told me I should try it out, so most of the time, I listen to people’s advice when food is concerned and when they introduce me to new products. I love to discover new flavors and ingredients, it’s like discovering a little part of countries and cultures I don’t know.

Growing up in Eastern part of France, the Hawaiian fish never really made it to the markets over there. We certainly have a huge and beautiful fish selections in Nancy’s market but never saw any Opah. Its flesh is dense, subtle, not really “fishy”, so when cooked it doesn’t break apart like the cod could be, it remains firm but yet moist.

For the proportions, I counted about 1/2 lb something around 250 g per person, it’s about one slice of fish per person.

The forbidden rice is quite different from wild rice, even though it’s black, it’s sticky and sweeter and its grain smaller and rounder. It turns into a deep purple color when cooked and has a very nutty taste. It contains a lot of iron and is an excellent rice even served plain as fish side dish. 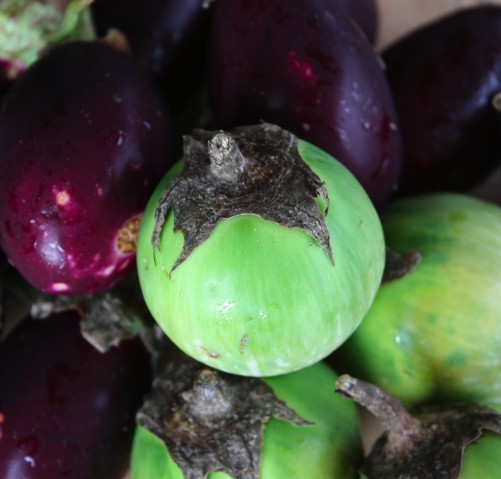 Blend all the marinade ingredients in a blender, place fish in half of the marinade and refrigerate for at least two hours.

Cut the eggplants and sprinkle with coarse salt, set aside for about half an hour to remove excess water. Rince in running water, pat dry and cover with the rest of the marinade. Marinate and leave in the refrigerator for about an hour.

In the meantime wash banana leaves and leave in water for about 1/2 hour so they get softer and easier to manipulate.

Remove fish from the refrigerator. Spread banana leaves in a flat surface. Take two leaves big enough so that they are 3 times the size of the fish and place them crosswise. Place fish in the middle and spoon one tbs of marinade on top. Wrap well and place in a previously heated oven (370F). Cook for about 20 min.

Remove eggplants for the refrigerator, place in a dish, sprinkle with some olive oil, cover with an aluminim foil and place in the oven. After 15 min remove the foil and cook for another 15 min.

Steam forbidden rice and serve fish in its banana leaf, some eggplants and rice on the side.

This entry was posted by silvia on February 28, 2009 at 11:52 am, and is filed under Fish/Seafood. Follow any responses to this post through RSS 2.0.You can leave a response or trackback from your own site.