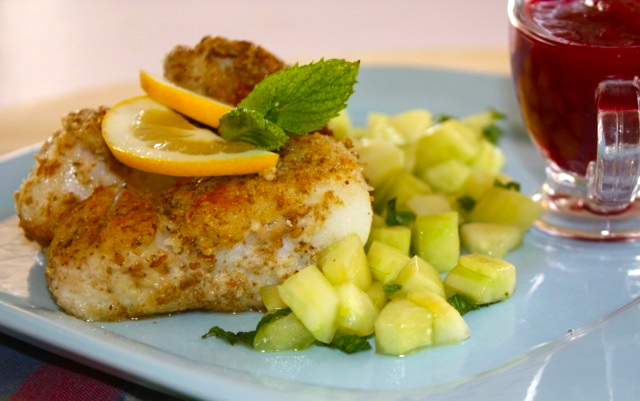 I like simple things in general, and a simple life filled with flavors and colors. When things get too complex, in my life or in my plate, it turns into chaos and I get confused. As Leonardo da Vinci once said “la simplicité est la sophistication suprême” I tend to agree with him (translated into “simplicity is extreme sophistication”, but then it’s just an opinion. This dish is fairly simple in terms of ingredients and nothing will be too confusing for your palate.

You need a thick cod fillet that will not break into pieces. You could serve it with another type of coulis, such as bell pepper, tomato, etc…but I had beets and I thought it would work well here…and it did. I love the sweetness and hearty flavor of beets.

Za’atar is a Middle Eastern dry herb mixture, I use it quite often when I want to give some oriental flair to my dish. It’s usually made of thyme, sumac, oregano, sesame seeds, savory and a bunch of other herbs and spices. It’s usually available at Middle Eastern stores. There are different versions, like the Palestinian, the Lebanese, Syrian, etc…but very similar in tastes, the color sometimes changes, darker or lighter depending on the ingredients ratio.

Heat olive oil in a pan, cook cod on both sides until golden brown, adjust with salt and pepper.

Serve cod with some cucumber salad and beet coulis on the side.

For the beet coulis

In a blender, mix beets, broth to form a smooth and creamy texture. Adjust with salt and pepper and add lemon juice.

Mix all ingredients together.

This entry was posted by silvia on October 16, 2015 at 12:27 am, and is filed under Fish/Seafood. Follow any responses to this post through RSS 2.0.You can leave a response or trackback from your own site.