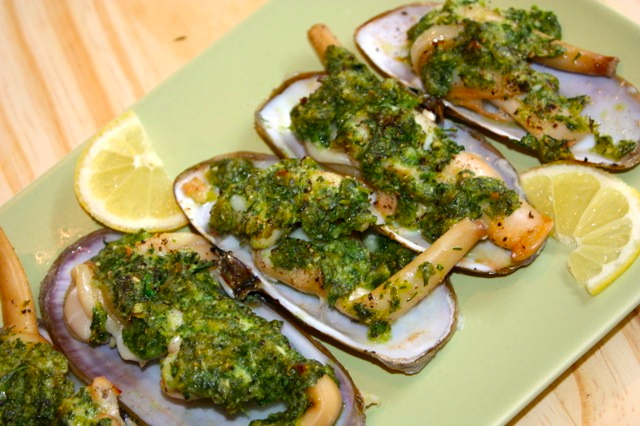 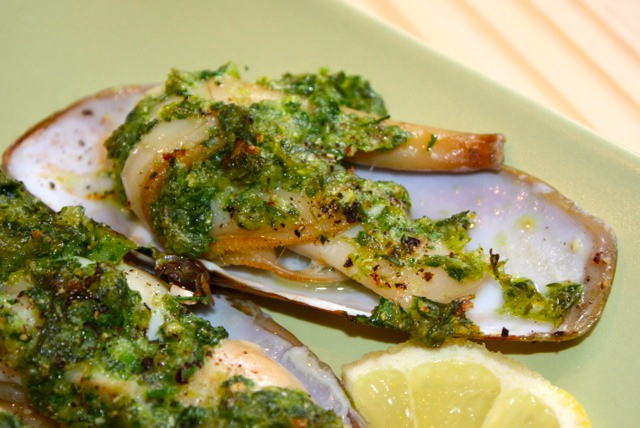 These razor clams remind me of my childhood with my grandmother on a beach on the Adriatic. We used to find those inside the sand and pick them to bring home. It’s been so hard to find them in the stores in the US, and even in Europe. I was reading an article saying that they were no longer part of the culinary world and that the chefs stopped serving them in restaurants for years. The good thing is that, they have decided to introduce them back into their menus and you can now find them in the stores.

The ones you find in Italy or France are smaller, not as thick and longer, they look like a knife. Actually the literal translation of “couteau” in French means knife. These razor clams being so big, they need to be cleaned a bit different than the ones you find in Europe. Those come from the Pacific North West so maybe that’s another type of razor clam.

Unfortunately those clams have been previously frozen, the good thing is that it was easy to open them. To clean them you have to remove the digestive system which is the dark part. Cut it off with scissors and it’s done.

For the herb mixture

In a blender, mix all ingredients except lemon zest. The mixture needs to be smooth, but not like a paste, you need some texture

If using frozen ones, open them and wash them well. Clean them removing the digestive system, rinse and pat dry. Place clams back on their shell.

Preheat oven at 370 F. Add herb mixture on top of clams and place in oven for about 15 min or less, until clams are cooked but not too hard. Remove from oven and drizzle with olive oil

This entry was posted by silvia on July 15, 2015 at 2:55 am, and is filed under Appetizers, Fish/Seafood. Follow any responses to this post through RSS 2.0.You can leave a response or trackback from your own site.