« To start or end the week with happiness – Herb and walnut breaded salmon with broccoli salsa
Pistou or pesto – Minestrone soup with quinoa, shrimps and pistou » 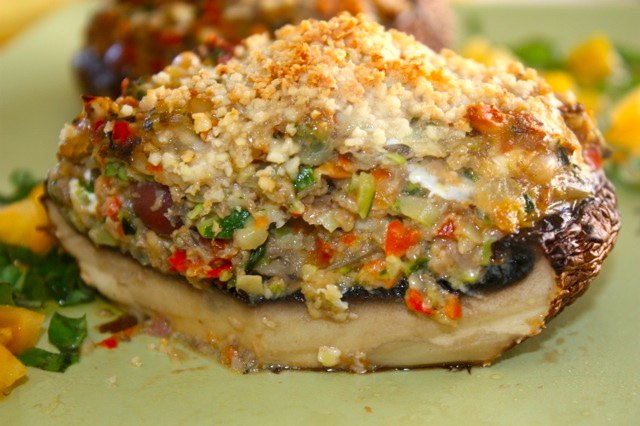 I cannot believe that my last post goes back to one month ago. Shame on me. I have no excuse, so shame on me twice. I have been back from France, then I got sick, then I have been busy working and busy working out, so one thing added to another, voilà, my blog is being neglected. Quelle honte!

In the vegetarian series, here is a good one. These mushrooms make a great presentation, have a lot of flavor and are light as a feather.

Since I found out that portobello mushrooms are just cremini mushrooms grown to an exaggerated size, I have not been as excited to cook them…yes, hélas the excitement is gone.

Yesterday, strolling around the vegetable section, some fresh and pretty portobello caught my attention. I have been ignoring them for a while, and since I felt like eating mushrooms, I bought them not really knowing how to prepare them. It ended being a light stuffing with finely chopped vegetables, basil, pine nuts and goat cheese. They are ridiculously light so if you are hungry, I suggest eating two with some side dish. I loved the light texture and flavor of the stuffing…so I would say portobello are back in my kitchen. I don’t know for how long, but so far, they’re in.

Chop in a mixer zucchini, onion and bell pepper. The texture needs to be fine but with some pieces.

Heat olive oil in a pan and add mushrooms, let them cook until the water evaporates. Remove from pan.

Chop mushrooms as finely as the other vegetables.

In the same pan, heat olive oil, add zucchini, onion and pepper mixture. Let them cook at medium heat for a few minutes (no water should be left in the pan). If there is still water, remove excess water with a towel or squeeze using your hands when the mixture has cooled down.

Sprinkle mushrooms with some olive oil, salt and pepper. Broil for 5 minutes.

Pre heat oven at 375F. Divide the stuffing on each mushroom, sprinkle with some bread crumbs and cook for about 15 minutes or until the top is golden brown. Serve hot with a green salad.

This entry was posted by silvia on November 16, 2013 at 2:58 am, and is filed under Appetizers, Vegetables, Vegetarian - dairy. Follow any responses to this post through RSS 2.0.You can leave a response or trackback from your own site.