I realized this blog really lacks meat recipes, even though I cook it for clients every weeks, I don’t really eat it, (unless I am forced with a stick!!), I just taste it for seasoning, so I would say this blog is a sample of the dishes I really enjoy eating.

I got so excited to find monkfish in the store, that I had to buy it (you need thick fillets to make medallions). Monkfish in France is a quite famous and reputable fish, but it can be confusing to figure out what species of monkfish it is. There are two kinds, one living in lakes and rivers, and one commercially sold as “queue de lotte” which means monkfish tail, with its bone which can be the kind living in the oceans. The main bone is very easy to remove since it’s has no small ones. In the US they sell fillets so its easier to make medallions. I love monkfish, it’s delicate, subtle and with a firm texture. In this recipe monkfish has been marinated in spices, then pan fried. It cooks quite fast and it’s a very simple meal to prepare, for your guests, your family or for yourself. In my case myself. 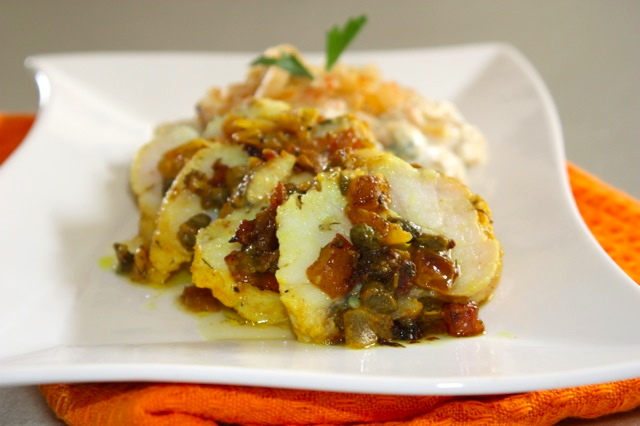 You can serve it with saute greens, or any other vegetable. I wanted to add a bit of exotism so I used eggplants; not that eggplants are exotic but combined with lemon confits, it adds a touch of Northern Africa. I never know what to do with those strange lemons. I have a huge jar of those that I stare at anytime I open the refrigerator as if they’re aliens. Today I took the aliens out of the jar, rinsed, them, chopped them and ate them….and they tasted  wonderful. Lemon confits are often used in Moroccan cuisine, to add the final sour flavor to a dish and complement spices very well.

Cut monkfish into 2.5 inches pieces. In a small bowl mix all marinade ingredients together and pour on monkfish, mix well to coat all the pieces cover with plastic wrap and refrigerate for at least 30 minutes.

In the meantime, pre-heat oven at 400F, then prepare the eggplant. Cut them lenghtwise, Using a knive, make small incisions in the eggplant (not the skin side) sprinkle with salt and a little oil. Place the eggplant under broiler skin up, and cook for about 15 minutes until it gets soft. Remove from the oven and let it cool a bit. Using a spoon scoop the eggplant and let it drain for about 30 min so it gets rid of the water. When it has completely cooled, add all the rest of the ingredients except for the confit lemons. They need to be added at the end.

Heat oil in a pan, pan fry the monkfish pieces until golden brown, then add the rest of the marinade. Stir well, adjust with salt and pepper. Turn down heat and cook until fish is cooked all the way through. Serve with eggplant purée topped with lemon confit.

This entry was posted by silvia on July 17, 2013 at 5:54 am, and is filed under Fish/Seafood. Follow any responses to this post through RSS 2.0.You can leave a response or trackback from your own site.