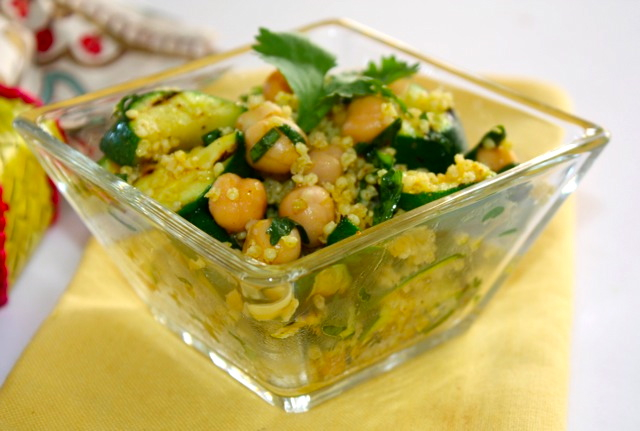 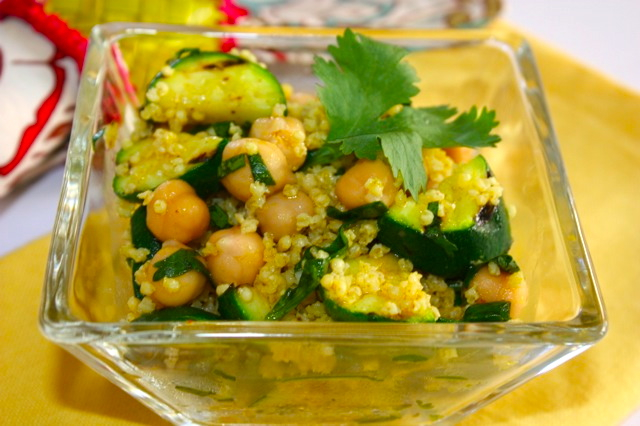 I get more and more requests for gluten free and vegan dishes, and yes sometimes I like to feature recipes like this one that are unusual still with a little Mediterranean flair. This taboule salad is both gluten free and vegan, light and flavorful. I have to admit that I have not extensively used millet, but will do so form now on, since it’s a versatile and nutritious little grain. There are a few recipes with millet on my blog, and these ones are my all times favorite, goat cheese, mushrooms and millet galettes on leek effilochéée and Quinoa galettes, with bell peppers, mushrooms and mint

Of course millet is known to be a bird’s favorite, so some people feel weird to eat something birds do, but it’s nonetheless delicious on our human table as well, mixed with vegetables, in galettes or in soups. I like its firm texture and unusual flavor. You can substitute millet with quinoa, Israeli couscous, couscous, or any other grain you like in this recipe, if millet is not among your favorite, but i also want to make people more familiar with this grain that has a lot of nutritional benefits.

I usually steam millet in my rice cooker like I would steam rice, or you can boil it as well.

Steam millet in rice cooker or boil in salted water until millet is cooked, about 30 minutes. Grill zucchini slices in a skillet, then cut in half and set aside. When millet is cooked, place in a mixing container and let cool until it gets lukewarm. Mix chickpeas and zucchini with millet. In a small bowl, mix dressing ingredients, pour on millet and toss well. Add chopped mint and cilantro, mix well, adjust salt if needed, add fresh cracked pepper and serve as a side dish or a salad as an appetizer.

This entry was posted by silvia on December 17, 2012 at 2:38 am, and is filed under Grains, Salads, Vegan, Vegetables. Follow any responses to this post through RSS 2.0.You can leave a response or trackback from your own site.