« Rice timbale with artichokes and peas, parmesan and truffle oil
Soup for the season – Split pea soup with pancetta » 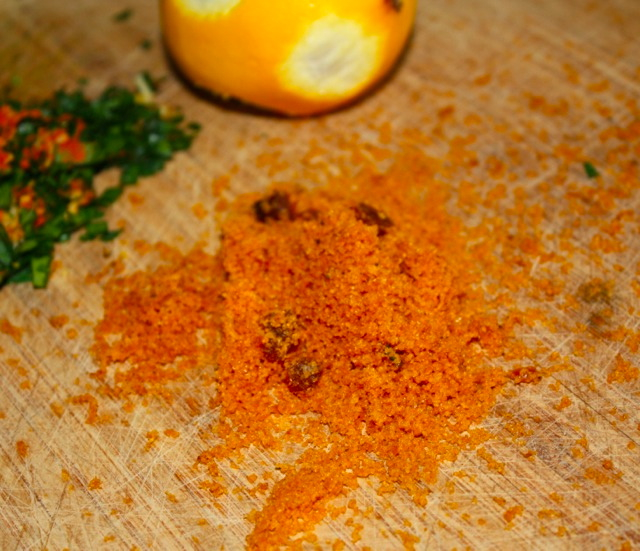 Bottarga is called mullet roe in English or boutargue in French and is popular in some Mediterranean countries. It is basically the eggs of the mullet fish that have been salted and dried, then preserved in wax. I think in Italy, Sardinia is the place where it is consumed the most, I have never seen it in Central Italy. I know that it’s eaten in Tunisia, so maybe the arabs brought it over to Sardinia. You can slice it, and eat it with bread, or like in Sardinia, grate it and sprinkle it over pasta.

It took me a while to find bottarga in the US but some Italian Specialty store carry it, well it’s not very cheap but it’s worth it. When I think about bottarga, I think about Sardinia, and I think about my Sardinian friend Mauro, who moved to London and whom I miss.

The first time I made spaghetti alla bottarga, I had no clue what to expect because I never tasted them before, so I didn’t know how they were supposed to taste…one sure thing, I added too much garlic, so the subtle flavor of bottarga was overpowered by the garlic. Then I decided to go to La Ciccia, a Sardinian restaurant in San Francisco and order a plate of spaghetti alla bottarga, to get an idea of the “right” thing. It was truly delicious since I had a small piece left, and decided to try and reproduce them, and this was quite close. The hardest thing here is to find bottarga, then the rest is amazingly quick and simple. One thing, do not cook bottarga, it will lose it’s flavor and texture, add it at the end in the pan when you add the spaghetti.

Bring salted water to boil, then add spaghetti. Cook until al dente. Keep some cooking water to add to the pan.

In a pan, heat olive oil and add garlic. Cook for a few minutes to flavor the oil, then remove from pan. Add parsley, lemon zest and chili flakes. Add spaghetti, some bottarga (leave some for the end) and some extra cooking water. Mix well, then sprinkle with the rest of the bottarga. Serve hot.

This entry was posted by silvia on November 8, 2012 at 5:24 am, and is filed under Express - Less than 30 minutes, Fish/Seafood, Pasta. Follow any responses to this post through RSS 2.0.You can leave a response or trackback from your own site.