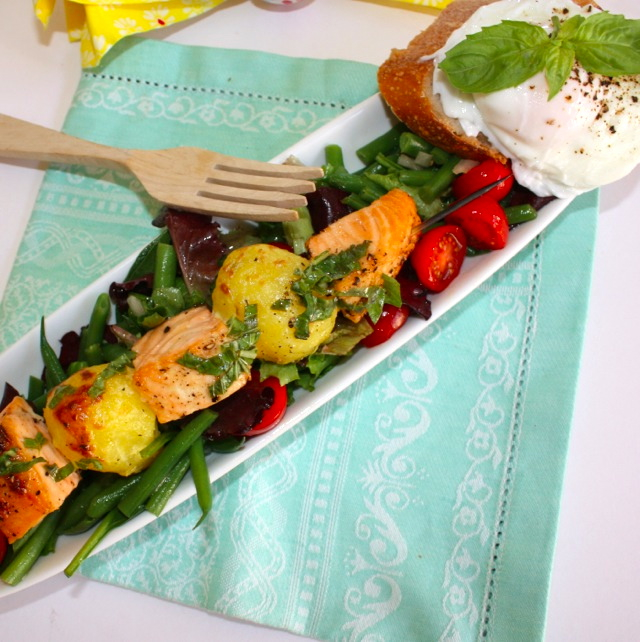 When you eat out, salades niçoises are always more or less the same, with minor variations from one restaurant to another…and often a little on the boring side. So after a few thoughts on how to make things a little more exciting and with a different way to prepare them, I came up with a salad that has the ingredients of a salade niçoise (less the salmon), that was lovely. Most of the ingredients are here but in a different way to present and cook them, which modifies all the textures and make them very interesting and exciting. Here the green beans are cut and mixed with the greens and cherry tomatoes. The olives are turned into a tapenade which is an olive paste from the South of France spread on top of the bread. The egg is poached and not boiled and the other final touch is the salt, I used sea weed salt (from Brittany) but of course, you can use any other sea salt. 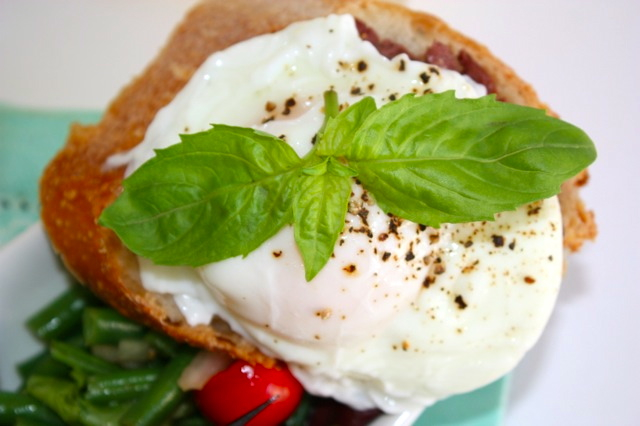 If you want to remain traditional and feel the salmon shall not be seen on a salade Niçoise, use tuna instead. This salad is really fun, and you can play with it using your imagination as you wish. For instance, if I had quail eggs, I would have poached two quail eggs and made two tartines, instead of one. Now there is not one particular recipe for salade niçoise, and each cook can make it the way he wants, even though the traditional recipe is not supposed to have any cooked ingredients, only raw. So if you want to say that my salad is not a Niçoise, like a Nicois (a person from Nice) would probably say. Well, I am ok with that…it is nonetheless delicious.

Sometimes for specific recipes, I like to remain as close as the original recipe as I can, but in some more “flexible” recipes, I also like to have fun in the kitchen and play around with food…but obviously it needs to be good or it shall not have its spot on the blog. 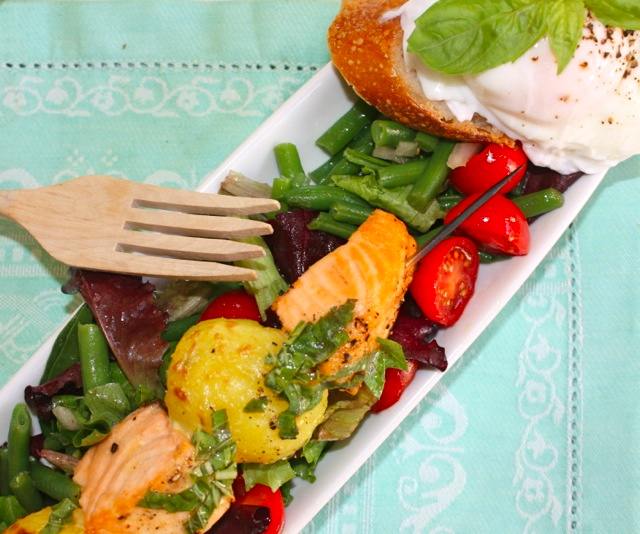 Start by cooking the potatoes in water. When the potatoes are about 3/4 cooked but still a little firm in the center, remove from stove. Let them cool and then peel. Set aside. Cut the salmon in about one inch cube pieces.

Cook green beans in boiling water until cooked but still firm. When cooked remove from stove, then let them cool and cut in about 2 inches pieces.

Using a wooden skewer, place one piece of salmon, then one potato, until you have two pieces each on each skewer.

In the meantime, in a container mix cherry tomatoes, salad, green beans, bell peppers. Prepare vinaigrette by combining all ingredients together.

For the tapenade, mix all ingredients together in a mixer. Toast baguette and spread tapenade on top.

Broil skewer in the oven until golden brown and salmon cooked all the way through or pink (depending on your tastes).

Poach egg in boiling water for about 2 minutes (poaching technique will come in another post).

Plate first salad/beans/tomatoes mixture, then place skewer on top, add the remaining vinaigrette on top of skewer. Serve with tartine of tapenade topped with poached egg, and drizzle with olive oil.

This entry was posted by silvia on February 23, 2012 at 5:30 am, and is filed under Fish/Seafood, Salads. Follow any responses to this post through RSS 2.0.You can leave a response or trackback from your own site.