We dressed up the beets – Beets stuffed with goat cheese, walnuts and garlic on a bed of kale vinaigrette 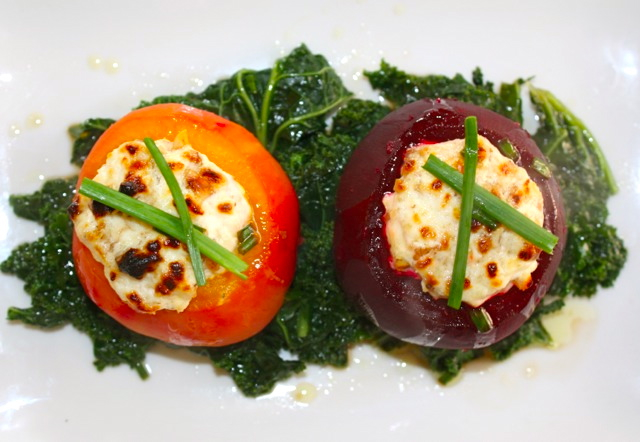 I am not used to eating beets in hot preparations, and I wanted to explore this further. Sometimes, you are so used to eating things in a certain way, that the thought of changing ways makes you uncomfortable. It’s funny how we, humans are creatures of habits. In France, beets are eaten either raw or cooked but in salads, but rarely hot. At least, I never did. I have roasted them a few times in the oven, and I liked them, but that’s it. Ca s’arrête là. It stops there. Beets being roots, I figured that like potatoes, turnips or any other root vegetable, you can accommodate them in many different ways, one of which being stuffed.

I tried those with Roquefort cheese instead of goat cheese and it was delicious. You can play around a bit with the recipe and I prefer Roquefort than goat cheese, but goat cheese and beets are a perfect combination. You can use smaller beets and serve two instead of one. It really depends on how many number of courses you have. Also, you can serve it on a bed of arugula salad, endives, etc…any kind of greens you like. As you can see this dish is quite versatile, and playful. 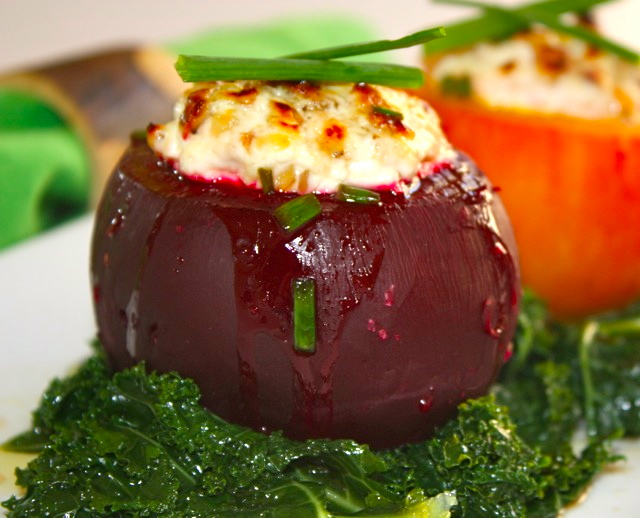 As for the color of beets, there is not much difference between red beets and golden beets, other than the golden ones tends to be a tiny sweeter and have a more fragrant flavor, but the difference is really not that big.

Cook beets in water until tender. Drain, let it cool and peel. Cut a bit of the bottom to make it flat so the beet can stand sill, then cut the top and scoop the inside of the beet to make room for the cheese. Scoop about one third, not the whole beet.

In a small bowl, using a fork mix cheese, garlic and walnuts previously toasted. Stuff beets with the cheese mixture.

Place stuffed beets in a tray and broil until the top turns golden brown.

This entry was posted by silvia on December 15, 2011 at 5:06 am, and is filed under Appetizers, Vegetables, Vegetarian - dairy. Follow any responses to this post through RSS 2.0.You can leave a response or trackback from your own site.