It’s not Paul, the octopus- Grilled octopus salad with fennel, peppers and olives 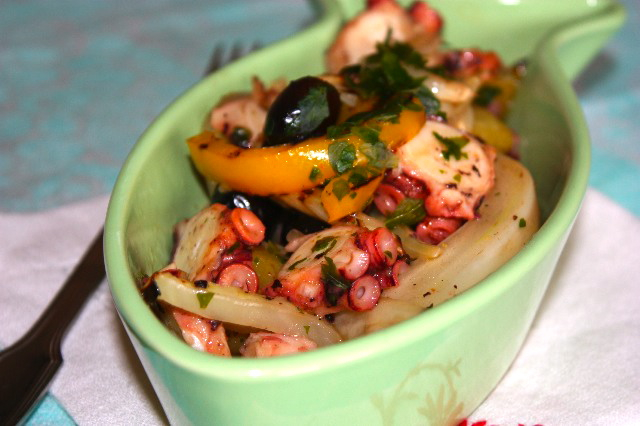 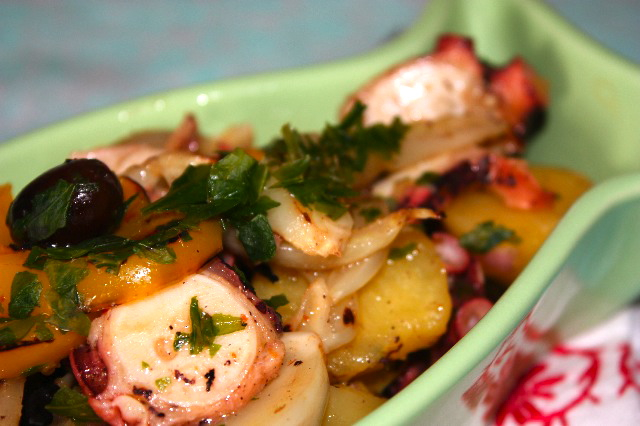 Has anyone heard the story of Paul le poulpe, or Paul the octopus? Well my cousin came to visit a few months ago and he told me about this octopus story. Paul was a French octopus whose life lasted from 2008 to 2010, quite a short life…maybe that’s a lifespan for an octopus.

Paul was very famous, simply because he could predict the winner of the soccer games. He predicted 12 out of 14 games during the world cup. For French people, soccer is the national sport, getting to know in advance which team would win, and most of all getting scores from a mollusk whose destiny is to be in a pan along with tomatoes and onions, rather on TV with sports commentator, is something linked to the divine. I have no idea how an octopus could predict such scores, but it did, doesn’t this sound odd?

I have not met Paul, and I am sure he was quite a smart animal…now I have to admit that I love octopus in any form, shape and recipe. I do feel a little guilty to eat it, but when I eat it, I simply don’t think about this and I enjoy every bite of it.

Cook octopus in water for about 2 hours or until tender. Slice in small thin pieces. Set aside in a mixing bowl. Grill fennel, peppers, onions on a skillet. Add to the octopus. Add all other ingredients and mix well.

Cook potatoes in salted water, and cook until tender, cut in half and add to the octopus.

For the vinaigrette, mix all ingredients together. Add to the octopus mixture and toss. Serve lukewarm with toasted bread.

This entry was posted by silvia on May 12, 2011 at 4:33 am, and is filed under Fish/Seafood, Salads. Follow any responses to this post through RSS 2.0.You can leave a response or trackback from your own site.