Bread or brioche? – Raisin bread with a swirl 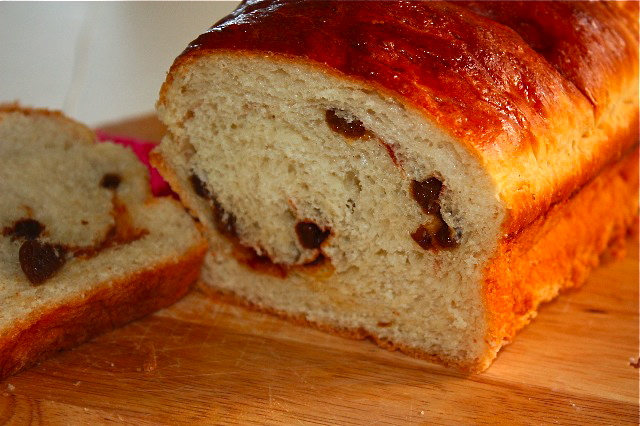 I reconciled with cinnamon thanks to Rui, my lovely Japanese neighbor. I decided I didn’t like cinnamon after moving to the US, where cinnamon is used in almost every dessert. I think I had a cinnamon overdose and refused to eat anything where I could taste it. Rui, gave me half a loaf of bread she made even though she said it didn’t turn out very well and was embarrassed to give it to me. I gave her fresh yeast a few days earlier, and she used it making this bread. One thing I never told her is that I don’t eat cinnamon and that I have been on a cinnamon rebellion for years. Jamais de cannelle !!! So I politely took the bread and what else to do? since I am polite, I tasted it, even though you could smell cinnamon one kilometer away…I thought well, if I don’t like it, will I be lying and tell her, I love it, or be honest and say, I hate it? Tough call, what would you do? Polite or brutally honest?

I was lucky, it was love at first bite! What a delicious, moist, and soft bread, a pure delight for breakfast with butter and jam. Then I thought “well, for someone who doesn’t like cinnamon, I did a pretty good job finishing it”.

After that happy encounter with cinnamon, I decided to make my own bread…yes with cinnamon…actually, this bread is closer to a brioche than to what we French call bread. It has the ingredients and texture of a brioche. Now thinking about it, we do have a bread that is called “pain brioché” which is something in between a bread and a brioche, so talking about nuances and making people confused, yes the French are the masters of it.

It’s faster to make than a bread or a brioche, you don’t have to prepare it the night before, so it’s a great recipe to have in hands. Essayer c’est l’adopter! To try it is to adopt it.

Dissolve yeast in 1/3 of milk. In a recipient mix milk/yeast mixture, sugar and 1/5 of the flour, mix well and let it rest for about 1 hour. Add the rest of the ingredients (except raisins, cinnamon, 1 tbs sugar) and mix well, to form an elastic dough, knead the dough for about 15 minutes.

Form a ball, and let rise for about 2 hours. Flatten the ball to form a rectangle, spread 1 tbs sugar raisins and cinnamon. Roll the dough and let it rise for another hour. Using a brush, spread some yolk on top. Cook in a pre-heated oven at 370F for about 45 minutes.

This entry was posted by silvia on April 6, 2011 at 4:55 am, and is filed under Breads, Breakfast/Brunch. Follow any responses to this post through RSS 2.0.You can leave a response or trackback from your own site.