No reblochon, no tartiflette – Fake Tartiflette with asparagus and brie 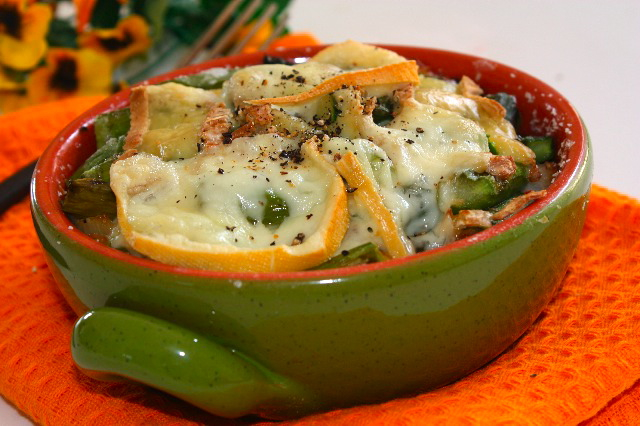 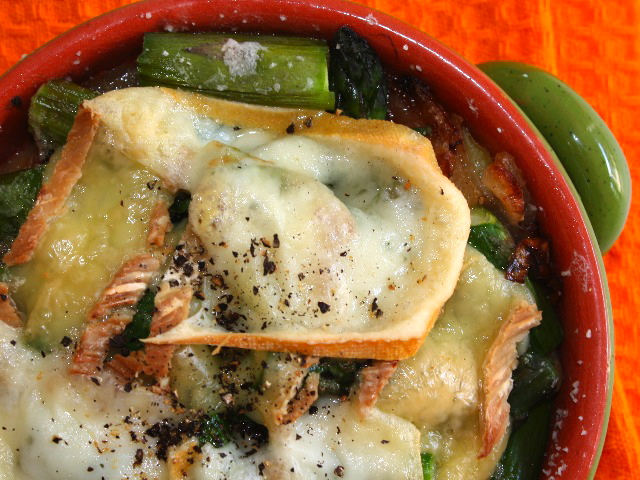 If you’ve been to Savoie (Savoy), you’ve probably tasted one of their specialties, la Tartiflette. Unlike what it may sounds, Tartiflette is not a tart. It’s not an old dish either. Most recipes derive from an ancient one and go back in times, some can be retraced to Etruscan era. Not tartiflette. It’s a dish that was created in the ’80s in Savoie, as a way to promote and sell reblochon, one of their local cheese.

Basically traditional tartiflette is made out of layers of thin sliced potatoes with caramelized onions bacon and topped with reblochon cheese on it. Of course, this is a heavy dish served when you go skiing in the mountains since Savoie is the main ski resort in France. My version has asparagus has brie (a cheese from the brie region, close to Paris) and St Nectaire (a very old cheese from Auvergne, pressed and uncooked made with raw milk). Now the cheese is supposed to look like this only with the crust up. I would not call this tartiflette simply because the reblochon cheese has been replaced by brie and St Nectaire, and those two are not cheeses from Savoie. Hope that makes sense. Even if it’s a fake one, it’s delicious.

For those interested in preparing a real tartiflette, add bacon when browning onions and replace brie with half reblochon and that’s it! Reblochon ( a soft washed-rind cheese, made with cow milk) is traditionally cut in half, and placed crust up on top of the potatoes so that the cheese will be able to melt and infiltrate the potatoes, and the crust will remain golden. I did not want to add a half brie here, for many reasons, one of which being a calorie issue. As far as fat content is concerned brie and reblochon and St Nectaire, they have a similar ratio of 45%.

Tartiflette is a rustic meal, it’s not considered a sophisticated dish, nor complicated to prepare, but you need great cheese, preferably imported that melts well and potatoes that remain firm without crumbling. Then if you have those two components right, you’ll get a great tartiflette…presque comme en Savoie!

Boil potatoes in a large pot of water, when cooked remove from pot, and let them cool. Peel and cut in 5mm slices.

Heat oil in a pan, add onions and brown them.

Bring a pot of water to a boil, add asparagus and cook for 3 minutes. Remove from heat and drain. set aside.

In a deep dish preferably using a clay pot, spread olive oil at the bottom of the pot. Add one layer of potatoes, add onions, add one layer of cheese and asparagus. Adjust with salt and pepper. Proceed again with potatoes, onions, asparagus and top it all with cheese.

Cook in a pre-heated oven at 375F until the cheese has melted and the crust golden. Serve hot with a green salad.

This entry was posted by silvia on August 11, 2010 at 6:37 am, and is filed under Vegetarian - dairy. Follow any responses to this post through RSS 2.0.You can leave a response or trackback from your own site.