The crab lost his house – Soft shell crab with almond crust on grilled fennel and radicchio salad, cream of chick peas and capers 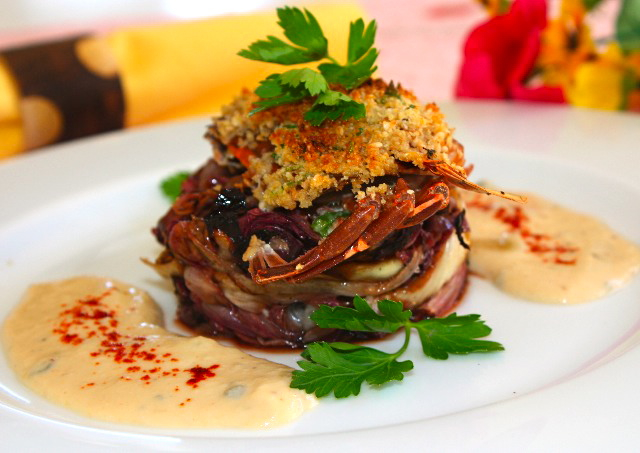 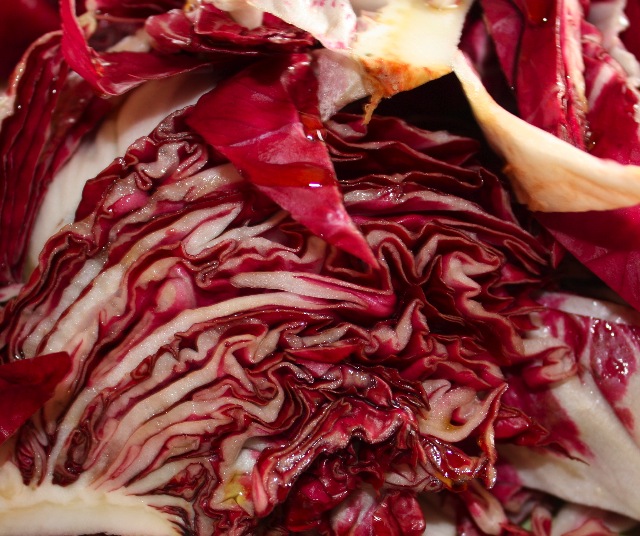 Pardon my ignorance, I thought the soft crabs were a particular kind of specie…They’re apparently not. When I found out that they’re basically regular crabs that molted their hard shell, I felt a little bad to eat them. Poor little crab without his house…but I already bought them, so I had no other option that cook them…so the little homeless crab had to end up in my plate. I found a very useful site explaining how to clean them on ChefsLine.

Radicchio has two of my favorite features, colorful and bitter, which combined with fennel makes a very harmonious combination. The sweetness of the grilled fennel stands out beautifully, and complement the slight acidity of the cream of chick peas due to lemon juice and capers. So what about the crab?? I have been talking about everything except about our naked crab..and this recipe is not about fennel, nor radicchio BUT only about the crab!

This crab is such a treat, every bite is meaty and delicate, it is baked so not as crunchy as you would get it it was fried, but definitely healthier. So delicious! the topping makes it flavorful with a little sesame note and blends to perfection with the chick pea cream.

For the cream of chick peas and capers

Grill radicchio and fennel on a grill pan, then place on a large bowl, add other ingredients and set aside.

In a mixing bowl, mix all ingredients together except for the crab (of course). Top each crab with the breadcrumb/almond mixture, drizzle each crab with a little olive oil, and back in the oven at 400F until the top is golden brown and the crab is cooked.

For the cream of chick peas

Serve with some warm salad in the middle of the plate, two soft shell crabs on top and spoon cream of chick pea on the side.

This entry was posted by silvia on July 5, 2010 at 5:20 am, and is filed under Fish/Seafood. Follow any responses to this post through RSS 2.0.You can leave a response or trackback from your own site.