« The palet Breton got dressed up – Pistachio palet breton dressed with mascarpone cream, raspberries and raspberry coulis
The entire Provence in a jar – Lavender yogurt with peach-apricot compote » 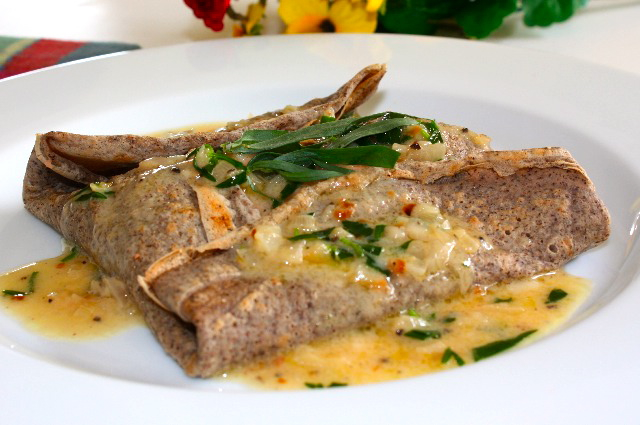 I haven’t made those for so long, I usually make them when we have a “crêpe party”, and those haven’t occurred in a while!

Basically, the traditional savory crêpes are made with buckwheat flour, the sweet ones can be made with white flour.

A buckwheat crêpe is called “galette bretonne“, the batter is a little different from a regular crêpe in the fact that there is water in the batter but no eggs. The traditional galette Bretonne (or also called Buckwheat crêpe, crêpe au sarrasin) is mainly stuffed with ham, eggs and cheese and it’s called “la complète“…now you can make it with whatever item you like if you want to make it less traditional. I like the traditional one, but I think those three ingredients are a little too heavy for me. Other alternatives could be spinach and mushrooms, eggs and mushrooms, tomato and mozzarella, goat cheese and spinach, etc…or whatever you think would work. 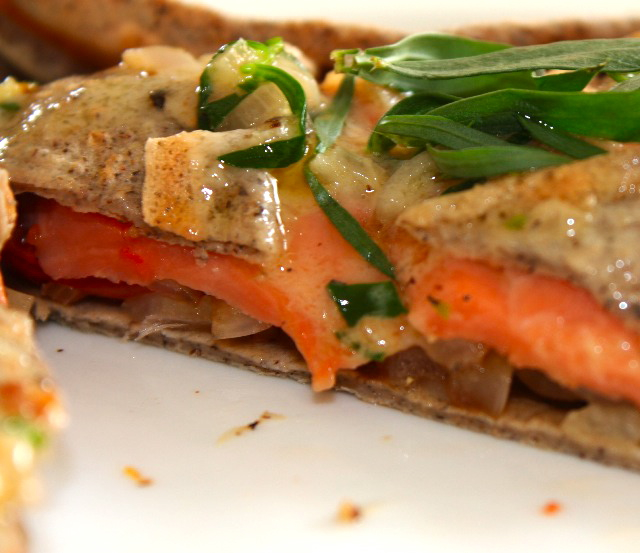 If you have been to Brittany or Paris you must have encounter that delicious treat. There are many crêperies Bretonnes in Paris close to Quartier Montparnasse. The first one I ate was at the Jocelyn crêperie, it was a double crêpe, unlike this one that is simple, a double crêpe is comprised of one crêpe at the bottom, filled with whatever you like, and one other crêpe on top of the filling, then folded and topped with salted butter. You better be hungry for that one, but it’s so good with some dry cider (cidre brut).

Sometimes, I have a crêpe party at home and the crêpes go flying around…then everyone gets so excited when we reach dessert, sweet crêpes with nutella, banana, ice cream and whipped cream. How can you refuse one of those? Vive les crêpes!!

You don’t need necessarly need a crêpe maker and a spreader to make crêpes, a non-stick pan works well too. You can make a 100% buckwheat flour batter if you like it more hearty, I like to use 1/2 white flour and 1/2 buckwheat flour.

For the galettes batter

For the tarragon sauce

Mix flours together in a large mixing bowl. Add water while stirring, then milk, add salt and keep stirring to obtain a smooth consistency. Let it rest for about 2 hours.

Caramelize onions in 1 tsp olive oil. Grill tomatoes on a grill pan and set aside.

For the tarragon sauce

Heat olive oil in a pan, and brown shallots. Dissolve dehydrated fumet in 1/3 cup water. Add to the shallots, reduce a little then add cream. Reduce for a few more minutes and add tarragon, salt and pepper.

Cook galettes as you would for regular crêpes. Using a non-stick pan, spread some batter in the pan covering the whole surface (you need to butter the pan prior to making the galettes). Flip the galette and let it cook on the other side. Add caramelized onions, tomatoes, capers and salmon. remove the galette from the pan and bring borders on the inside. Top with tarragon sauce and serve hot.

This entry was posted by silvia on June 14, 2010 at 9:13 pm, and is filed under Breakfast/Brunch, Fish/Seafood. Follow any responses to this post through RSS 2.0.You can leave a response or trackback from your own site.