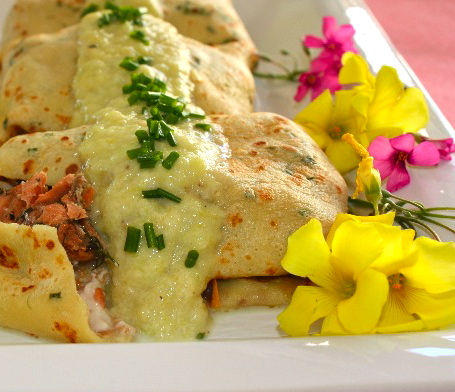 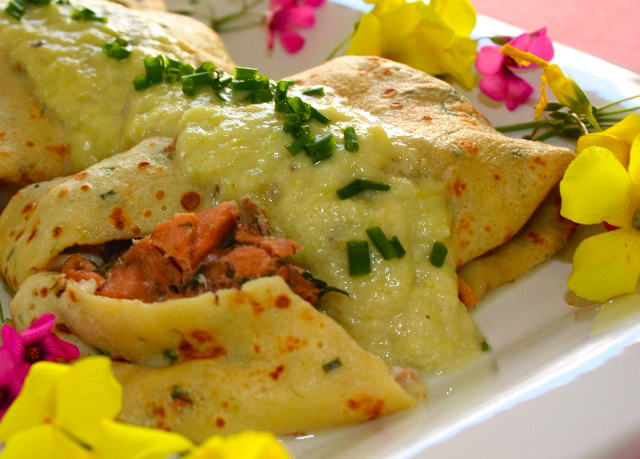 Crêpes are not necessarily boring, ok you’ll tell me they’re just crêpes, and everyone knows how to make them, so what’s the big deal? The bid deal is that the batter is flavored with chives and stuffed with marinated salmon topped with a smooth leek sauce.

No, you don’t have to wait for la chandeleur (candlemas) or mardi gras to eat crêpes which are the two main celebrations in France when we make a big deal making crêpes. La chandeleur takes place 40 days after Christmas which is February 2nd. and comes from the word candle, it’s basically a mixture of pagan, christians and jewish traditions. The origin of crêpes goes back to a Celtic belief of worshiping the God of crops, with its round shape that looks like the sun and refering to the solar wheel. Basically chandeleur opens the period of carnival which derives from the latin Carnelevare, and meaning “removing the meat” and goes back to the 40 days before Easter.

Mardi Gras was the last day Christians could eat “gras” meaning fat before Ashes Wednesday (les cendres) then Lent (carême)…and during this time, would indulge in beignets (some kind of doughnuts, crepes, bugnes, etc…)

Nowadays, its religious meaning has been lost, but we still eat crêpes even if most people don’t know exactly why, other than because they’re just delicious.

Crêpes can be simple and ordinary such as crêpes au sucre, sprinkled with sugar, or sophisticated filled with delicate seafood stuffing and flavored batter…and so many variations in between those two.

I always remember frozen crêpes we eat in France you buy at the supermarket, that mostly kids love, they’re stuffed with a creamy mixture of ham and mushrooms, and or gruyère cheese, you just place them in a pan until they turn golden brown! I loved those when I was a child…Good memories…

Ingredients for about 6 crêpes

For the crêpe batter

In a mixing container, place flour and eggs, then add milk gradually mixing well. Add salt, olive oil and chives. Mix well to obtain an homogenous mixture. (You can add beer at this time, it will make the batter lighter).  Let it rest for about one hour.

Make crêpes as you would for regular crêpes using a non-stick pan or a crêpe maker. Proceed until all the batter has been used. Keep aside.

Cut salmon in small cubes, place in a container, add soy sauce, lemon juice, dill, a little salt and pepper. Let it marinate for a few hours (overnight would be best).

Place salmon mixture in the middle of each crêpe and fold each side toward the middle in a square shape parcel.

Cook in a 370F pre-heated oven for about 20 minutes or until the salmon is cooked but still slightly pink in the middle or well cooked according to your tastes. The top of the crêpes should be a little crispy.

Serve hot with sauce on top.

Cut the white part of leeks, wash well. Heat olive oil in a pan, add shallots and brown them. Add leeks and let them sweat at low temperature until they become tender, add salt and pepper. Add broth and let it simmer for a few minutes. Add cream. Cook fo another minute or so, then blend in a mixer to obtain a smooth sauce. You might need to add broth if the sauce is too thick. Add mustard and mix for a few more seconds.

This entry was posted by silvia on April 10, 2010 at 8:50 pm, and is filed under Appetizers, Fish/Seafood. Follow any responses to this post through RSS 2.0.You can leave a response or trackback from your own site.