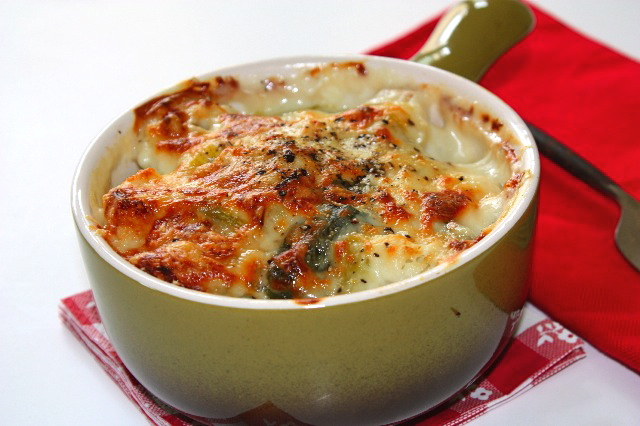 I forgot how DMV can be a nightmare, waiting for your number 389 when the current number is 210 can be the story of an afternoon. So people bring balls to play with, and all kinds of entertainment to spend three to four hours.  I somehow like to observe people, it’s certainly more interesting to observe people sur la terrasse d’un café, in a cafe terrace with a coffee in your hands, so when your hands are holding nothing more than a number, patience becomes a virtue and people looking becomes one too.

I had prepared this gratin in advance so it just needed to be gratiné when I got home and that’s the beauty of gratins, you can prepare them in advance and throw them in the oven when ready to be served.

I have used goat milk in soufflés and in the béchamel when preparing gratins that turned out lighter with a more delicate touch than with cow milk, and partly due to the fact that goat milk is lighter to digest than regular milk. You can slightly taste to goat milk which is not as strong as in cheeses. Basically you can replace goat milk in many dishes using cow milk. Gratins are very common in France and can be made with any vegetable. 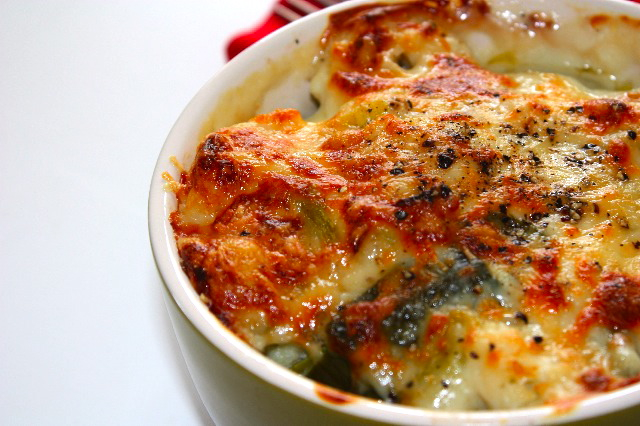 Gratin can be considered a plat unique (a one meal dish), and universally appreciated, it’s certainly a meal in itself with a side salad. If you feel like something hot with a golden crust, stop thinking, this is it. Some people are fighting to eat the crispy crust while others are fighting to get to the soft melting middle. What type of gratin eater are you? I am definitely a crust lover, but would not mistreat the middle either. No matter how you eat it, gratins always evoke a comforting and warm cuisine that everyone loves.

I would use premium gruyère cheese that melts well and leaves a nice golden crust the quality of the cheese is important and will make a great difference in the texture of your gratin. Also, you could add a little goat cheese as well instead of adding gruyère in the mixture but gruyère on top is a must if you want a golden and melting crust.

Heat olive oil in a pan, add shallots and brown them. Add leeks, adjust with salt and pepper and cover with lid until leeks are tender.

Cook cauliflower in salted boiling water until cooked but still firm. Drain and set aside.

Start preparing the béchamel by melting butter, then adding flour. Stir well. Add milk, salt and pepper and reduce temperature to medium heat. Keep stirring until the mixture starts thickening. Cook for a few minutes until it has reached a nice consistency, but should not be too thick.

Using individual ramequins or one larger dish, add one layer of leeks, then add one layer of cauliflower and end with another layer of leeks. Sprinkle with 1 tbs gruyère cheese (or goat cheese for each ramequin) and pour béchamel. Try to coat your vegetables with cheese and bechamel by mixing the vegetables carefully. Sprinkle with the remaining cheese, grind fresh pepper and cook in a pre-heated oven at 370F for about 30 minutes or until the gratin has reached a golden brown color.

This entry was posted by silvia on April 6, 2010 at 9:30 pm, and is filed under Side Dish, Vegetables, Vegetarian - dairy. Follow any responses to this post through RSS 2.0.You can leave a response or trackback from your own site.