« Small dish but big flavors – Eggs cocotte with cream of zucchini, sundried tomatoes and artichokes
Artichokes are back in town – Tagine of artichokes, chickpeas, potatoes, red peppers and olives » 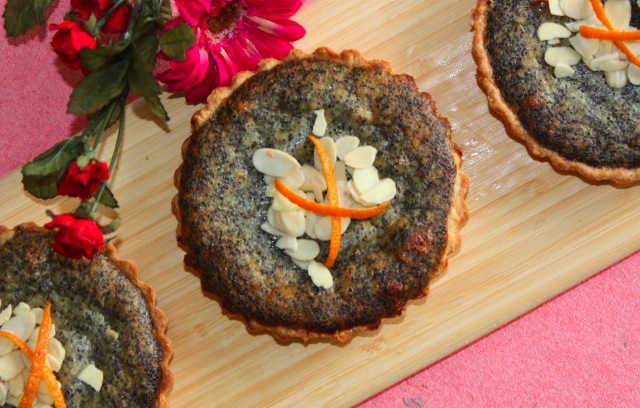 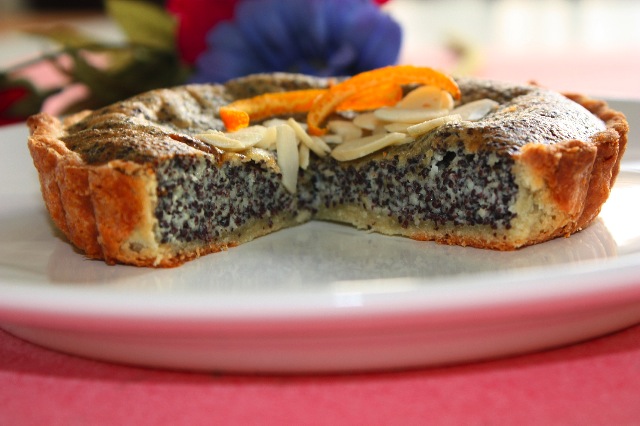 This tart is an old specialty from Lorraine, to be more precise, the city of Toul (a very small town near Nancy), which no one in the US probably knows where it is nor how to pronounce it…nothing wrong with it, since most French people don’t know it either (as far as the location is concerned). What is Toul famous for? probably some Gris de Toul, a dry white wine, and its cathedral.

Originally this dessert has another layer of dough on top, so technically it’s a tourte instead of a tarte, a tourte is somehow the equivalent of a pie, because of the top layer of dough. Poppy seeds are supposed to help with digestion, and its use is quite common in Alsace-Lorraine, Austria, Hungary, and Central Europe’s cuisines. Some poppy seed tarts are savory, mixed with cheese, but the use of poppy seeds is very common in sweet desserts also. The original recipe has no sugar, due to the fact that in the last century, sugar was considered to be a luxury ingredient among peasants, and no one could afford it. Even though poppy seeds tend to be naturally sweet, I just could not imagine a so called “sweet” tart without sugar, so I added some in the filling and also I sprinkled it with orange sugar when cooked.

The poppy seeds need to be crushed into some sort of a paste, that’s the only way you get to taste the subtlety of the poppy seed flavors and its beautiful blue color. I crushed it, but still wanted to keep a bit of the crunchy texture, so in this case it’s a semi-paste.

In the past, poppy seeds were also used as herbal mixture to make some sedative and calming drink, then due to many fatal mistakes in dosage when given to babies, they decided to stop its use.

I made a regular dough of 300 g that is enough for a large tart for 6-8 people, since I only made 4 tartlets, I had leftover dough. You can adjust quantities accordingly or use the extra dough for some other fruit tarts.

The crust is a mixture of various flours which is something I usually do, it gives the crust a very distinct and subtle taste, I stopped using just plain white flours in crusts.

For the crust (enough for 8 tartlets)

For the filling (for 4 tartlets)

In a mixing bowl, combine all flours together, add sugar, mix well. Add yolk, butter and water (the equivalent of what you removed in the white part of the eggs), mix well but not too much, in order to form a nice ball. Wrap in a plastic film, and place in the refrigerator for at least 30 min.

Boil milk and pour on top of poppy seeds. Soak the seeds in milk and let them absorb the milk. Crush them using a mortar. You need to get somehow a semi-paste.

Roll dough and place in individual tartlet molds. Fill with the poppy seed mixture and cook in a pre-heated oven at 365-370F for about 25 minutes, until the bottom of the crust is golden brown, but make sure to not overcook the filling, or it will dry out.

Remove from the oven. Let them cool, and sprinkle with orange sugar and sliced almonds.

This entry was posted by silvia on March 6, 2010 at 12:38 pm, and is filed under Desserts. Follow any responses to this post through RSS 2.0.You can leave a response or trackback from your own site.