Orzotto, almost like a risotto – Saffron barley with calamari 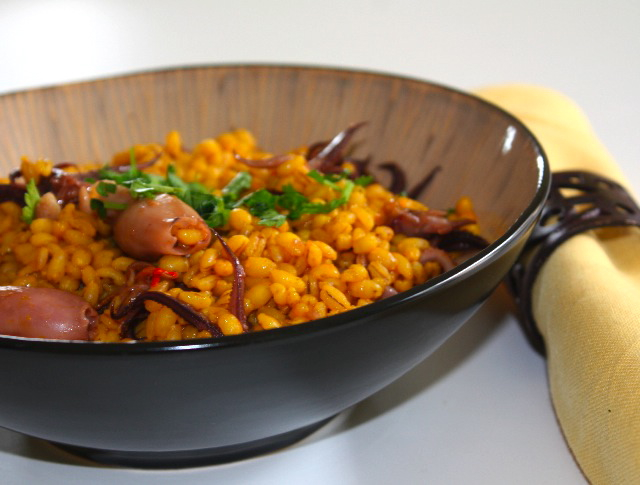 It looks like I am on some seafood addiction lately, I understand it can get boring for people not fond of seafood. I bought extra calamari when I made the stew to be able to use in some other dish.

That wonderful little cereal used here, barley is one of my favorites. What I love about barely is that it always remains firm, so you always get that crunchy and a very pleasant little chewy bite. I used pearl barley whose bran layer has been removed (vs. bran barley) its size doubles volume when cooked due to its high content in fibers. It contains a lot of minerals and vitamins therefore makes it a perfect nutritious and healthy grain with low glycemic index. Orzo in Italian means barely and not “orzo pasta”.

The consumption of barley goes back to Greek and Roman civilizations due to its nutritious properties, the easiness of its transportation and long preservation, it’s supposed to be one of the most ancient grain that can be retraced back to the Egyptians.

In Italy, Orzo is also used in making a drink mixture called “caffè d’orzo“, basically it’s a powder like coffee (you can either dissolve it in hot water like instant coffee or preapre it in a moka maker) and used like coffee with milk to be served for breakfast. Its consumption as a drink started in the XVIII e century among peasants and continued throughout the years. It was mostly a drink consumed by elderly and kids for its healing properties, it’s nowadays served “al bar” (coffee shop) like espresso and is even more expensive. I love my bowl of caffè d’orzo, sometimes that’s my dinner!

I love saffron barley as much as I love saffron risotto, sometimes I just like something that has a less creamy texture than risotto, more chewy and fluffy, so barley or farro are my first choices. You can make this dish with farro too, it has equally lots of great nutrients. This barley dish has tons of character with the presence of saffron and gives it a distinct Mediterranean flair. A simple and flavorful dish very easy to prepare, un ottimo primo piatto molto gustoso ma veloce da preparare!

Start preparing the barley like a risotto. In a pot, heat 1 tbs olive oil, then add shallot and brown. Infuse saffron in lukewarm broth. Add barley, coat with olive oil and progressively add broth, adjust with salt and pepper (I did not use white wine like in a traditional risotto nor parmesan) and proceed until barley is cooked. You want the barley to have absorbed all the liquid unlike in a risotto, the barley needs to be somehow “dry”.

In a pan, heat 1 tbs olive oil, add garlic and stir. Add calamari, paprika, salt and pepper and sauté at high heat until calamari are cooked but not rubbery and still tender. Reduce a little of the liquid, but keep some.

When barley is cooked, add to the calamari pan, and mix well until the juice has been absorbed by barley. Sprinkle with parsley and serve hot.

This entry was posted by silvia on February 26, 2010 at 9:57 am, and is filed under Fish/Seafood, Grains. Follow any responses to this post through RSS 2.0.You can leave a response or trackback from your own site.