Grandma's secret recipe – Potato crescia with greens and many other things 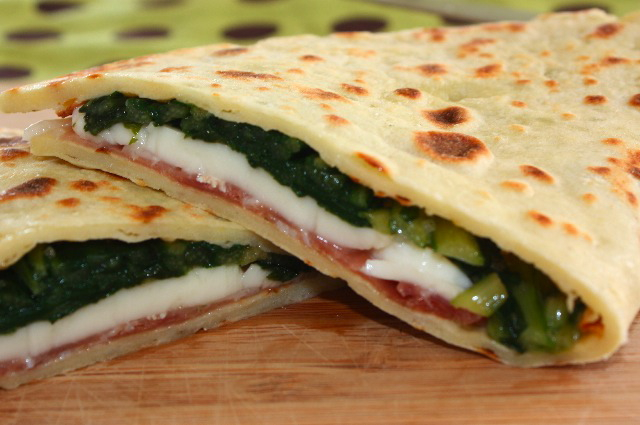 My grandma used to make this crescia when we were kids (my cousins and I) since we were all living together as in a traditional Italian family, and we were just going crazy for it, it was called la crescia colle patate (in dialect it’s more like la crescia col patet). I remember her bending and in sweat, flipping the crescia back and forth on top of the grill on burning coals, she was already old but working so hard to make us happy. We had a fireplace in the attic we would use to grill meat, roast chestnuts, and grill crescia, when my grandma was in the mood for it. The wooden flavor would make anything taste wonderful.

Crescia is a word used in my parents region to call some types of focaccia or piadine, it’s basically a local word. Piadine are from Romagna region and are famous all over Italy, and of course in most of all in the neighboring regions of Romagna. They’re flat types of bread very thin and that are stuffed with various cheeses, greens such as spinach or kale, prosciutto, lonza or any other local product. 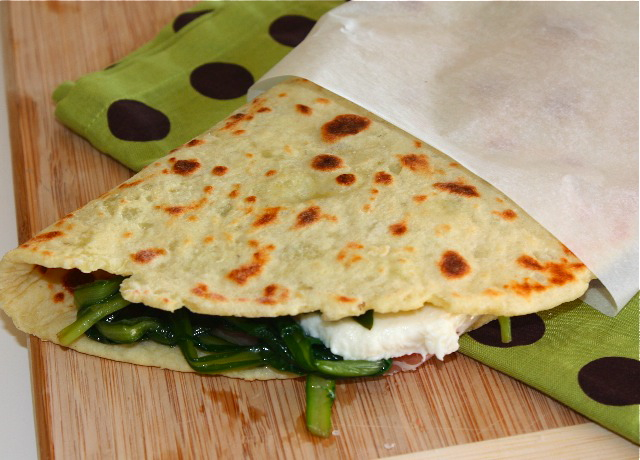 I don’t want to confuse you between a crescia and a piadina, but they’re two cousins, and if you ever end up in Romagna you might run into piadina and a meet a crescia if you arrive in Urbino, la città di Raffaello. In Romagna, piadina is a street food, and you can find many restaurants where they’re served with so many side dishes that you can stuff your own piadina with whatever you want.

Crescie on the other hand are usually grilled and originated in Marche and Umbria regions. There are different recipes for crescia, most of them do not have potatoes in the dough, but mainly flour, eggs, lard, water, salt and pepper. My grandma version has potatoes and no lard.

My grandma made this crescia with a potato base and made it a little thicker than regular piadina, and it was our treat. It is hard to translate something so typical and precise into another language, most of the time there is no translation for it because it does not exist anywhere else. I was trying to find some equivalent in English and could not find it.

When the crescia gets cold, it gets a little rubbery, so you need to eat it hot. The base is somehow a gnocchi dough base with a little more flour. Since I don’t have a fireplace, I cooked this in a skillet and it worked quite well.

I used dandelions in this recipe, my grandma used white cabbage, you can also use spinach or any green you like and any Italian cheese such as pecorino, or any sharp cheese. If you have a wood fire place where you can grill food, please try to make a crescia, it’s heavenly.

If using dandelions, previously cook in salted water for about 5-7 minutes, than drain, let it cool and squeeze excess water. Heat olive oil in a pan, add garlic and rosemary, stir to get the flavors out without burning the garlic. Add the greens and saute for a while. Adjust with salt and pepper.

Boil potatoes in water until cooked allt he way through. Let them cool and peel.

In a bowl, mash potatoes into a thin purée, add egg and flour and mix to form a smooth and solid dough.

In a wooden working surface, divide the dough in 6 equal portions and roll each of them into a round flat circles about 3 mm thick.

Heat a large non stick pan or a grill, then cook crescia until both sides are golden brown, maybe a few minutes, depending on how think your dough is.

Remove from grill, drizzle with olive oil, coarse salt and stuff with greens, cheese and prosciutto.

This entry was posted by silvia on February 17, 2010 at 8:04 pm, and is filed under Appetizers, Breads. Follow any responses to this post through RSS 2.0.You can leave a response or trackback from your own site.