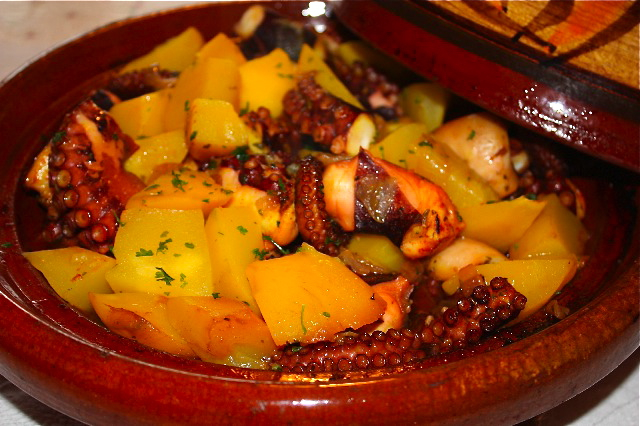 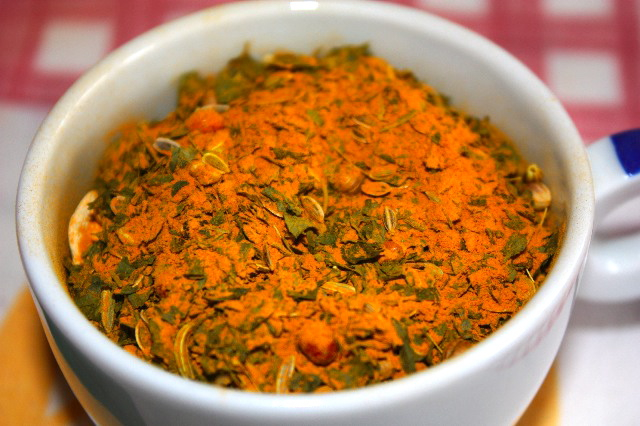 From what I’ve seen and heard, I have found very few people crazy about octopus…unlike me, I love it, like every thing else that lives in an ocean. The thing with octopus is that it needs to be well cooked, and prepared the right way or it can get hard to chew, and rubbery. I have tasted an octopus carpaccio in a small restaurant in Como Lake, Italy, where the octopus was cut in paper thin slices, then marinated and topped with rucola, lemon juice and olive oil. Octopus is very popular in Mediterranean cuisine and despite its strange prehistorical aspect, has an extraordinary delicate flavor and can be prepared in many different ways.

For this recipe, you can cut the octopus in smaller pieces if you don’t like to have big chunks of tentacles in your plate. I wanted to make octopus pieces as big as the mangoes. Don’t get intimidated by this strange animal with its long legs and tentacles, you’ll be surprised by its delicacy.

I found this recipes couple of years ago on a tagine recipe book (I forgot its name, I only remember it was a purple book), the little twist is the addition of the spice mixture you can buy at some specialty counter at our Nancy’s market. You can make it as well, keep it in a air tight container and use it in fish dishes, it’s really a great mix. Every year when I come home, my mom makes this tagine for me, she knows I am crazy for octopus, the only problem is that she used a whole octopus this time, this one weighted 5 lb, so there was enough octopus for an army. How much octopus can you eat?

Cooking octopus in clay tagine pot makes it very flavorful and tender, the addition of mangoes 20 minutes before removing it from the oven adds a sweet touch that gives this dish an exquisite exotic touch. I use my tagine very often and cooking in clay pot makes a big difference in terms of flavor. I even bought another clay pot here, that will need to fit in my suitcase and arrive in San Francisco in one piece. That will be my last day challenge.

Spice mix for a small jar

Cook octopus in boiling water for about 30-45 minutes. Remove from water, drain and let it cool. Cut in small pieces about 1 inch thick.

Heat olive oil in your tagine, and brown onions. Add octopus, paprika, spice mix, salt and pepper. Mix well. Cook in a pre-heated oven for 1h30 hour at 375-380F. 20 minutes before removing from the oven, add mangoes, cover and cook until the mangoes are cooked but still firm and not mushy. Sprinkle with cilantro and serve with white rice, steamed potatoes or herbed quinoa.

This entry was posted by silvia on January 19, 2010 at 4:15 pm, and is filed under Fish/Seafood. Follow any responses to this post through RSS 2.0.You can leave a response or trackback from your own site.