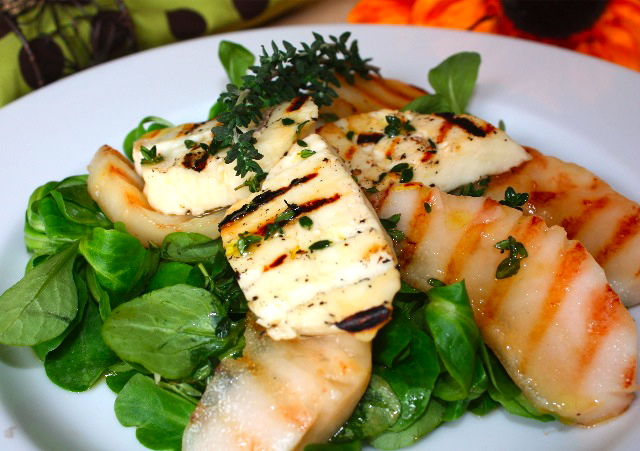 I met haloumi cheese in the US, I never saw it in France nor Italy. Maybe because France has about 400 kinds of cheeses, so they don’t have any lacking in that category, you can eat one different cheese a day for one year! Isn’t that wonderful? I am wondering how they were able to come up with so many cheeses. Italian cheeses are great but they don’t have as a many varieties as the French. Even though I am not a huge cheese eater like most French people, I really enjoy and appreciate good cheese with great crunchy baguette. But this is not about French or Italian cheeses but about Cyprus and its wonderful haloumi.

The particularity of this cheese is that it can be grilled and as I said comes from Cyprus, that little Mediterranean Island, even though it’s been considered European, it’s closer to Turkey and Syria. The Northern part has been occupied by Turkey since 1974, I guess there must be a heavy Turkish population and influence. So haloumi is becoming more and more popular in the Mediterranean countries. It’s traditionally made with a mixture of goat and sheep milks and has a somehow salty taste. I really like it on salads with pears or grapes, but it needs to be served as soon as you grill it or the cheese tends to become rubbery when it cools down.

Mâche salad is one of my favorite, it’s soft and tender and my parents used to grow it in their garden, so I remember when I came back from school my mom had always a huge bowl ready for me. The good thing is when you buy it, it’s already cleaned, so you don’t have to go crazy cleaning the earth that got inside the leaves. The washing and cleaning process is not an easy one.

First prepare vinaigrette, by mixing lemon juice, olive oil, thyme, salt and pepper together. Then, grill pears in a grill pan, then set aside. Grill haloumi.

You can make extra vinaigrette and toss some salad in it, then with the rest you can drizzle on top of pear and haloumi slices.

This entry was posted by silvia on November 11, 2009 at 11:17 pm, and is filed under Salads, Vegetarian - dairy. Follow any responses to this post through RSS 2.0.You can leave a response or trackback from your own site.