« A wild side – Wild rice "à la forestière" with mushrooms, carrots and walnuts
No I did not miss you – Roasted chicken thighs with lemon, herbs, olives and sunburst squash »

In the world of vegetable galettes – Zucchini galettes with feta, chili and thyme 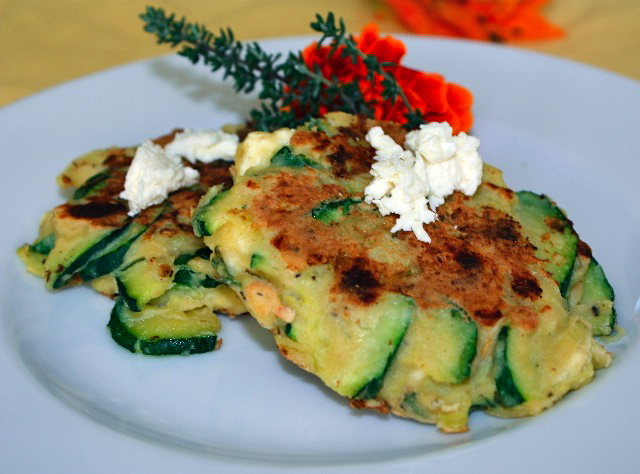 I love to make those vegetable galettes, they’re quick to make, original and delicious…so I might keep this for some side dishes, but not yet sure. You’ll probably think that those have nothing to do in a Thanksgiving menu, but I think it is allowed on my table since I did not grow up here. So that is my lame excuse. For years, I have been invited at friends’ house for Thanksgiving, so I never got to organize one, it’s been three years in a row that I am actually having friends over and it’s been quite fun.

I made those zucchini galettes gluten-free for some gluten allergic guests. I usually make them with regular flour but for those who cannot tolerate gluten, rice flour works fine. The flour I bought was a little more grainy than wheat flour but was not really a problem. I thought cooking without gluten would be tricky and it’s actually not. There are tons of alternative to wheat and it tastes great too.

Ingredients for about 8 galettes

Using a mandoline, slice zucchini very finely. Place in a drainer, and sprinkle with 1 tbs coarse salt for about 30 min. to let the water come out. Rinse under running water to remove the salt and squeeze tightly with your hands to remove excess water. Place in a mixing container.

In a large bowl, beat eggs with flour to make a thick paste. If paste is liquid, add extra flour. Mix well to obtain a homogenous mixture. Pour on top of zucchini. Mix well so that the zucchini get coated with egg mixture

Add thyme, chili flakes and adjust with salt and pepper, (don’t add too much salt, since the mixture is usually salty enough due to the feta cheese and salt remaining in the zucchini). Add feta, mix carefully not to break it, you want to incorporate feta pieces in the mixture.

Heat large pan, and spoon about 2 tbs of mixture forming some regular galettes. Cook until both sides are golden brown.

Serve hot as an appetizer with smoked salmon, or with a salad, or as a side dish.

This entry was posted by silvia on November 15, 2009 at 11:04 pm, and is filed under Appetizers, Side Dish, Vegetarian - dairy. Follow any responses to this post through RSS 2.0.You can leave a response or trackback from your own site.