My finger got stuck in the jar – Ebelskivers stuffed with Nutella 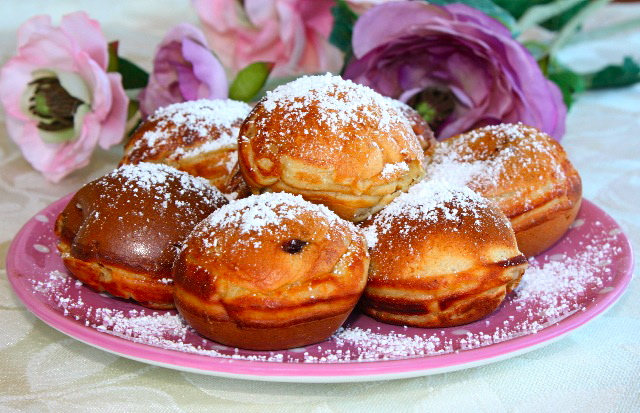 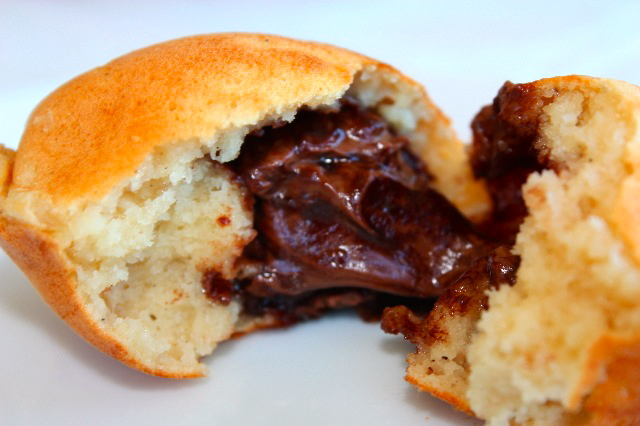 Well, I would have never thought to make something with Nutella…Usually, I don’t cook with Nutella, I just eat it from the jar, and when the jar is half empty, I use my fingers. No worries, I do not stick my finger in any jar that I serve guests, in case you are wondering, that would be quite un-hygienic.

I had this conversation with Mary from Keep Learning Keep Smiling not that long ago. She admitted she loves condensed milk so much probably as much as I love Nutella that she likes to lick it from her fingers which I thought was funny. She gave me the idea to write a post about it. I don’t eat Nutella that often, I buy a similar organic Hazlenut-coconut spread that seems to be healthier, but still Nutella is an institution, so sometimes I buy it to serve it with crêpes because I have a friend who would not eat crêpes without it. I am not sure Nutella is made to be cooked, it’s a pâte a tartiner, and usually those spreads don’t do well at high temperatures. So I figured I had to use it in a recipe where it does not cook that much.

So looking at my pile of pans, I saw this ebelskiver pan I bought a while ago when I worked for that family with two kids…they loved those little balls (all kids do) with raspberry stuffed in the middle. If you have kids, they will go crazy for those ones. Ebelskivers are Danish (Dutch too have their own version), they look like round donuts but are not fried, they’re filled with all kinds of things, raspberries, jam, cheese, etc… I filled half of those with Nutella and half with blackberry jam, so if you are a Nutella fan, you will love those. I don’t think I need to give you a description on how  delicious they are when Nutella melts in the heart of those cute little balls. It’s easy to imagine.

Usually I stick to French and Italian cuisines since I grew up with those and I don’t adventure myself in Dutch or Scandinavian cuisine or other ones I have not been exposed to. I think to understand a cuisine, it’s important to understand its culture, its country, its traditions. Those ebelskivers are an exception to the rule, because they are something in between donuts and pancakes and that I grew up eating bignè. The batter is close to a pancake batter with some slight changes.

The little trick is that you need a specific pan…but that pan is available in many US stores, so no this is not a fancy pan I brought back from Europe, I bought mine at Bed, Bath and Beyond. 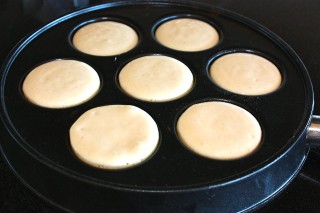 In a mixing bowl, mix flour and baking powder together. In another bowl, beat egg yolk and sugar vigorously, then add milk and beat until the mixture gets smooth. Add vanilla beans and powder. Add oil. Mix well. Add gradually the egg/milk mixture to the flour, stirring constantly until you get a smooth batter. Beat egg white until it get stiff, then incorporate to the mixture.

Heat the ebelskiver pan, greasing each hole with very little oil. Pour some batter in each hole. Do not fill the whole to the top since the ebelskivers tend to rise. When the batter has risen up to the top of the hole, check the bottom to see if the ebelskiver has turned golden brown. At this point, add whatever you want in the middle. You can add a piece of fruit (I love them with a raspberry), some jam, nutella, etc…Then using two bamboo sticks, turn each ebelskiver on the other side. To make sure they’re cooked, stick a stick inside and remove to see if the batter adheres to the side of the stick. If so, decrease heat and continue cooking and checking color and making sure they don’t burn.

Remove from pan, sprinkle with powder sugar and serve hot.

This entry was posted by silvia on October 24, 2009 at 11:07 pm, and is filed under Breakfast/Brunch. Follow any responses to this post through RSS 2.0.You can leave a response or trackback from your own site.