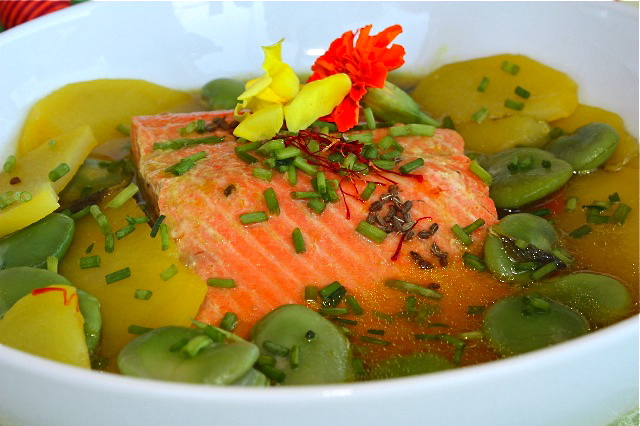 That might not be that original but it is so good that I had to put it up. I don’t know why but I am a little tired of seeing fish served with potato purée,  not sure either why almost all restaurants do that, but it is certainly a big déja vu and I am wondering why they could not use other vegetables, such as turnips, parsnips, fennel, etc…It’s not so much the potato that bothers me, but the purée.

As much as I want to become a vegetarian, and stop consuming animal base products, including fish, I am unable to do it, well I am probably weak in that respect.  Another weakness on the list (among many)…A friend of mine, big meat consumer, refuses to eat fish because he considers fish to be close to humans and he said it’s like eating our own specie, isn’t that strange? I never had a fish as a pet, maybe if I had one, I wouldn’t be able to eat them either. Since I have Pepito, the parakeet, I am wondering how can people eat birds…he is such a little friend. Most of the time, people eat what they eat, without thinking about what it actually is. At some point in my life, I even tasted porcupine…something I would not be able to do today.

I love fava bean so much that I would put them everywhere, salads, soups, fish, pesto, side dish…fava bean rule! I think I have been on a low carb diet lately because I have been thinking about potatoes a lot, and usually it’s a clear sign that my body wants some. I am not a big potato eater, but once in a while, I enjoy them.

Nage in French means swim, and it’s a way we use when talk about a dish that has been prepared with a court-bouillon, a brothy type of stew, or simply broth. Here the salmon swims in the broth, and it’s a very healthy recipe. The thing is when fish is cooked en nage, you need to make sure your broth has lots of flavors or it tends to be insipid. I had white cod cooked this way in a top notch restaurant in San Francisco and it was so bland, the poor fish was barely swimming in some dirty tasteless water.

The broth has a gorgeous yellowish color due to saffron and the potatoes are cooked in it, so they absorbed that color as well.

Heat olive oil and add onion quarters. Cook for a few minutes, add water, vegetable broth, and all the other ingredients. Cover and cook for at least 30 minutes. The liquid needs to reduce and become a little thicker with all flavors infused. Adjust with salt.

In another pot, add 1 cup of water and bring to a boil. Add fava beans and cook for about 3 minutes. Drain and peel. Set aside.

When the broth is almost ready, add potatoes. Cook for about 10 min or until cooked, do not over cook or they will get mushy, the slices need to remain full.

Add salmon fillets, cover and let simmer for about 10 minutes or until salmon is cooked to your taste. Add fava beans and remove from the stove.

Remove salmon fillets and potatoes, and set aside. Drain the broth.

Place salmon in a deep dish, add vegetables around and pour some court-bouillon around. Sprinkle with chives, anise seeds and a few saffron threads.

This entry was posted by silvia on September 22, 2009 at 10:20 pm, and is filed under Fish/Seafood. Follow any responses to this post through RSS 2.0.You can leave a response or trackback from your own site.