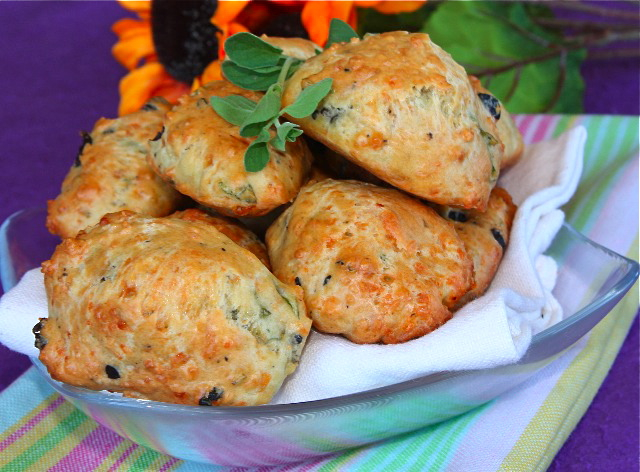 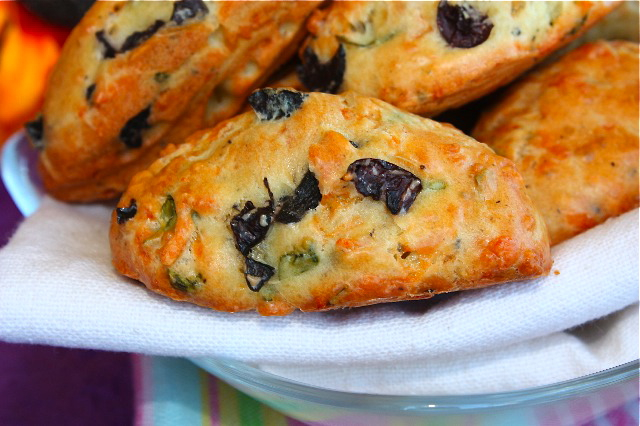 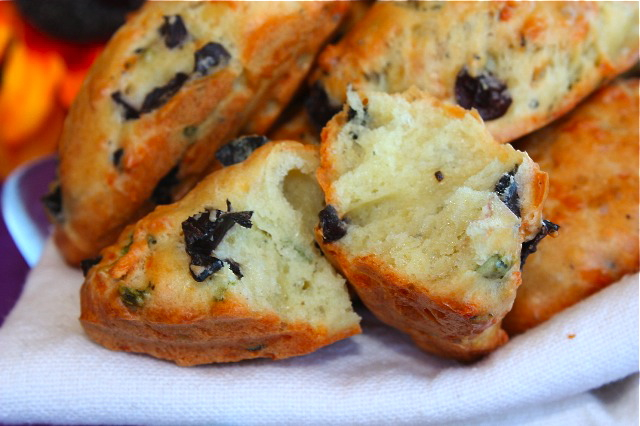 After a sunny and perfect weekend, not too much breeze, not too hot, just perfect day of hanging out with a friend, I realized that when people drop by, I never have snacks to offer them. I rarely snack or buy snacks, so when you have nothing to offer people other than wine, or apéritif, they tend to get buzzed a little too fast. So having little bites would be something to think about.

As every Sunday, I speak with my mom who keeps me updated on what is going on over there. So she had guests and made mini savory olive madeleines in her fancy silicon molds. I don’t know why I never of think of making those. They are perfect for an apéritif, snack or whatever, you can even even freeze them…so I figured I would make some too, and if no guests show up, I will give them to my neighbor. Which is what happened.

They’re fun to make and they don’t have to be the regular boring ones. In France, savory madeleines are common, it’s somehow trendy, and they’re great to nibble on. Not that I particularly love to follow a trend, because sometimes they don’t make any sense, but if you taste those, a lot of sense is in there. I can assure you.

Here is for the little story….Madeleines de Commercy are born in Lorraine that’s why I am bringing this up (yes again, it’s a rainy region, but lots of stuff happened there! and Commercy is a small town – when it’s rainy, people stay inside, and lots of stuff happen in rainy regions). In 1755, King Stanislas (he was a Polish King who was a also Duke of Lorraine and ruled it for years; we have a gorgeous square called Place Stanislas with all Golden painted doors with the statue of the King in the middle) had an argument with his pastry chef, who quit “il a rendu son tablier“, he gave his apron back! Soon after, the King with his sweet tooth, got introduced to a pretty young lady whose name was Madeleine Paulmier, a servant at some marquise estate. She made those beautiful little bites for the King who became addicted to them and probably to her too, since he was known to like the ladies. She then became his personal supplier. Those little oval golden nuggets with the shape of a shell were then named after our pretty baker. Since then, Commercy has been famous for its madeleine fabrication.

Now the madeleine has evolved into a savory one and can be fun to make and to eat too. I think I will post more madeleines recipes…don’t even know why I didn’t think about it sooner. So much clutter in my mind lately, too many recipes and too little time.

For those savory madeleines, I used olive oil, the sweet ones need butter. Whenever I can substitute butter with olive oil, I do it. You can use butter too if you prefer in this recipe. My recipes are lenient, when you use the base quantities, you can flavor the rest with your ingredients.

In a container, mix flour and baking powder. In another container, mix eggs and milk, then add to the flour. Gradually add olive oil and mix well to obtain a smooth but sticky dough. Add gruyère, oregano, olives, and mix well to combine all ingredients together. Add salt and pepper. I add more salt than I would to a savory dough, I like them to be on the salty side, but you might not. I always taste the dough before adjusting with salt.

Place in the refrigerator for at least one hour.

Butter madeleine molds, and fill each with with dough but not up to the top, only 3/4 filled. Place in a pre-heated oven at 375F for about 10-15 min, or until the madeleines have risen and became golden.

This entry was posted by silvia on September 21, 2009 at 7:44 pm, and is filed under Breads, Side Dish. Follow any responses to this post through RSS 2.0.You can leave a response or trackback from your own site.