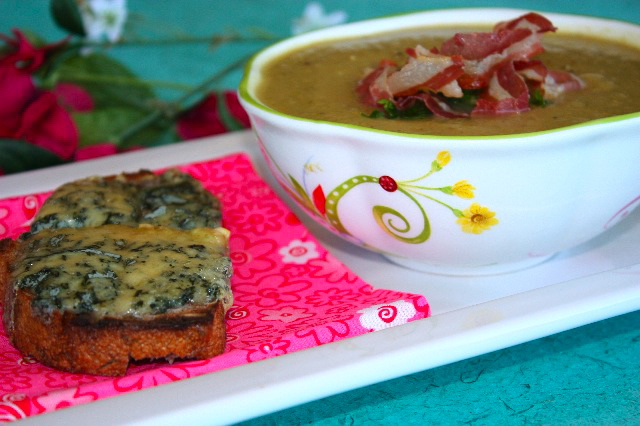 I was listening to Yves Montand’s classic song “les Feuilles Mortes” translated by “Autumn Leaves” but it literally means “Dead Leaves” and it never fails, I get tears in my eyes…that song makes me shiver. And yes, automne (fall) is coming…and I felt this soup really is a nice representation of fall, with its yellow and green colors.

Originally I bought this squash to stuff with a goat cheese mousse…it did not make it. I tried to resist for days to not cut it. It was too beautiful to cut and would have been such a great dish if I could have stuck to my plans…but no, I wanted a soup, and the only thing that was left to turn into a soup was this baby. So here. Morale of the story, don’t be too rigid, sometimes you can change plans.

I never get tired of soups, they can be blended, in chunks, cold, whatever, I love them…besides when they’re as healthy as this one, I love them even better, because I do watch roughly my calories intake and my weight. They say French women don’t get fat, well the bad news is, they do get fat, if they eat a lot…They do not have a particular nor wonderful metabolism (and the truth is that I am not even French, I just pretend, because I am just a confused woman).

So my question is why not eat delicious gourmet dishes that are most of all a bundle of health and nutrition (hope my English makes sense). The pancetta is optional, I love its crunchiness on top of the soup though.

The yogurt touch at the end is somehow a substitute to crème fraîche. In France we usually add 1 tbs crème fraîche in any velouté to make it even more velvety (velouté). Yogurt works perfectly fine here, let’s make it light, fat does not necessarily mean flavor anyway. Now do I sound like those “freaks” who watch every little bite they eat and do not enjoy anything always counting calories and talking about non-fat? Please say no, because I am really not, if you know me.

I got a little frustrated with my camera today, obviously I am no photographer, I could not shoot anything despite the great light I had coming from the bay window, everything turned out awful, just two shots out of 30 came out just ok and not even great. Too bad you cannot see the white dash of yogurt in the middle of the bowl because of the angle. I have no idea why some days where light is great I get terrible shots and days where it’s all grey, I get decent bright pictures. Is there a little demon in my Canon? Could be. Maybe taking one class or two where I bought this camera would not hurt.

For the roquefort tartine

Wash leek and cut it in medium size chunks. Wahs squash and cut in quarters. In a large pot, heat olive oil, add onion and let it cook until it becomes transparent. Add 1 1/2 tbs oregano, cook for a few minutes, then add squash and leeks. Cook for another 10 minutes at medium heat, stirring. Add broth. I never measure broth. I add enough so that it covers the quantity of vegetables and that is the perfect quantity for a veloute. Add salt. COver with a lid and cook at medium heat until the vegetables are soft and cooked, about 30 minutes.

In a small bowl, add yogurt and the remaining chopped oregano

In a non-stick pan, cook pancetta until it gets crunchy.

Cut roquefort in slices and place on top of bread. Broil until the cheese has melted.

Serve soup in bowls, adding a tbs of yogurt/oregano mixture in the middle of the bowl and top with a slice of pancetta. Serve with roquefort tartine on the side.

This entry was posted by silvia on September 16, 2009 at 7:22 am, and is filed under Soups. Follow any responses to this post through RSS 2.0.You can leave a response or trackback from your own site.