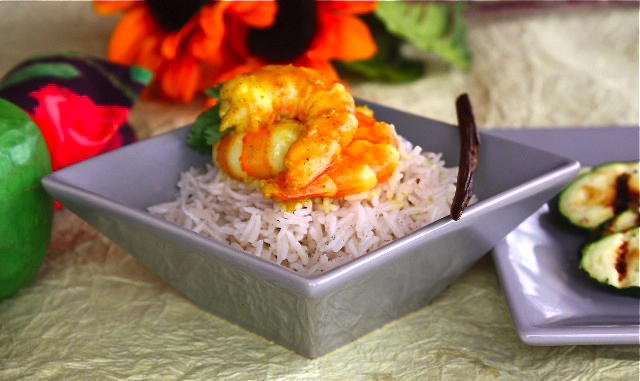 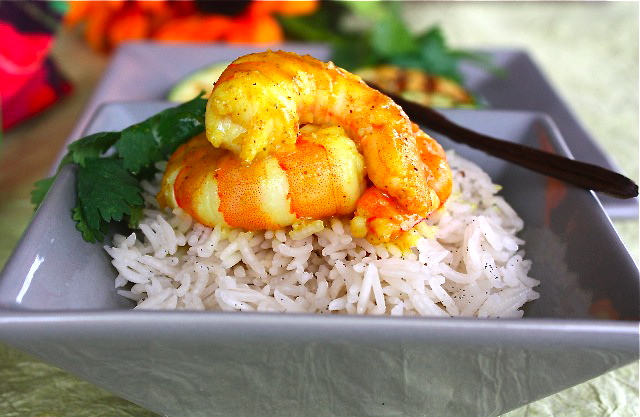 The first interesting part of this dish is the rice…yes indeed. An Indian friend of mine who arrived straight from Cochin used to prepare this type of rice and I loved its subtle fragrance. So now anytime I cook something with an exotic flair, I always prepare rice this way. Rice is steamed in a water that had been infused with lots of spices, so when the rice cooks, it absorbs a distinct and very unique flavor.

I substituted cinnamon with vanilla in my recipe. I am not a huge cinnamon fan, I liked cinnamon when I lived in France, but since I moved to the US, I think I got a little turned off by it, just because, almost all desserts and sweets have cinnamon in it, and I even got served many times cinnamon on my cappuccino which I was unable to drink. What is it with cinnamon? A little discreet touch once in a while is fine, but not all over the place. The funny thing is I have such a cinnamon phobia that when I order desserts in restaurants, I always ask the waiter if the dessert contains cinnamon. Then I get the weird stare as if something is wrong with me. Oh well.

The second interesting part of this dish are the shrimps. Well, the shrimps are cooked with a colombo spice mixture, colombo is a typical creole spice mixture made out of turmeric, cumin, cloves, black pepper, coriander, fenugreek, mustard and ginger. What we call DOM TOM (Département et Territoires d’Outre Mer) in France are the Antilles Islands such as Martinique, Guadeloupe, La Reunion, etc…therefore territories and districts that belong to France and who do have a créole cuisine, so yes many French go on vacation on those islands and they do come back with some new exotic recipes. Colombo is somehow the créole curry.

Since there is no perfect meal if there are no vegetables, I served a simple side dish of grilled zucchini…no spices, since the rice and shrimps do have lots of flavors, the zucchini balance the whole dish by being simple and neutral but nonetheless tasty.

So here we have a quite spicy and flavorful dish, you will be in Martinique and in Kerala at the same time, isn’t it a great trip? Oh let’s not forget Tahiti for the vanilla flavor.

First prepare the “spiced water” for the rice. Add water to a pot, then add cloves, cumin, cardamom, fennel and vanilla bean split in two. Scrape the beans. Bring the water to a boil and let it simmer for about 20-30 minutes to infuse the spices. Remove from pot and let it cool.

Place rice in a pot and add “spiced water”. To steam my rice I never measure quantity of water. I always add enough water so that 0.4 inches are above the rice level and I get a perfectly cooked rice. If the quantity of water has reduced (it certainly did) while boiling you might want to add some in order that rice gets 0.4 inches extra on top of its surface. Bring to a boil, then cover with lid and reduce heat to a minimum. Cook for about 20 minutes at very low heat. Remove from heat and let it sit for about 10 minutes before fluffing with a fork.

Serve spooning 3 tbs rice in a plate, top with shrimps and serve zucchini on the side.

This entry was posted by silvia on September 15, 2009 at 7:33 am, and is filed under Fish/Seafood. Follow any responses to this post through RSS 2.0.You can leave a response or trackback from your own site.