« That’s not for Pépito! – Green tea, coconut, and almond bouchées
Peaches for me, peaches for you – Tartlets with grilled honey-vanilla peaches on almond custard »

A little tradition doesn't hurt… – Scallops in their "shells" with mussels, shrimps and cod with leeks and Cognac sauce 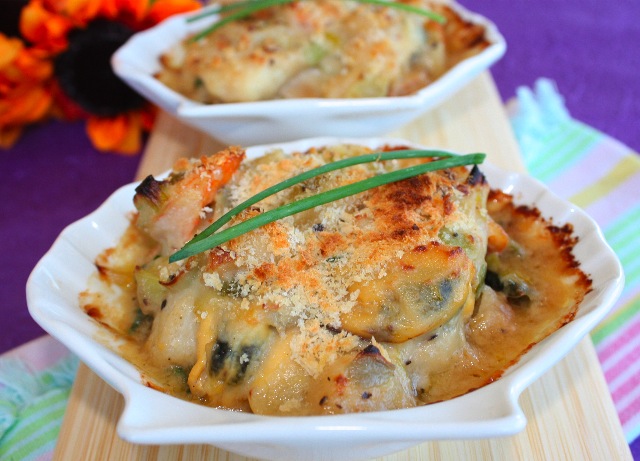 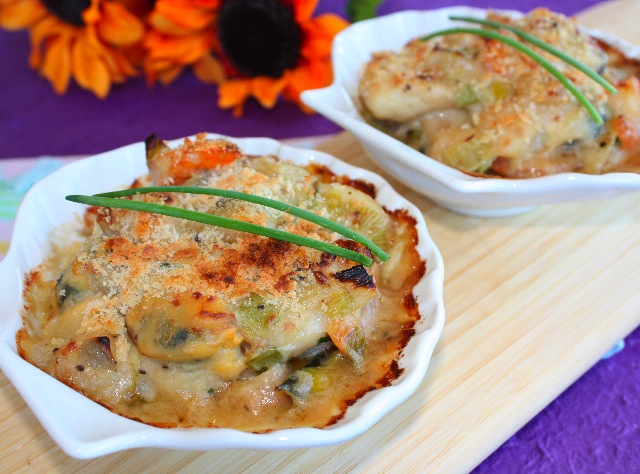 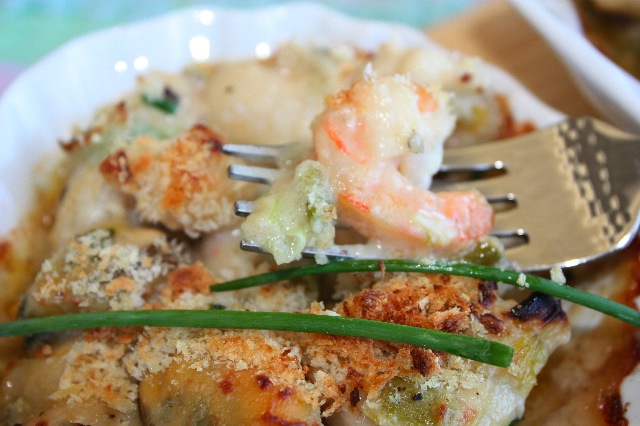 Sometimes, you just have to treat yourself…today was my treat day and I really enjoyed it to the fullest. Treating for me has to do with seafood, so those wonderful coquilles (shells) made my day.  I have a friend over for dinner tonight who relocated from Hawaii and who is having a difficult time adjusting to San Francisco life. It’s a definitely a wonderful city but tough, it certainly can be difficult to find a decent place to live, a good job, find friends, etc…so I wanted to make something that would make her feel good, unfortunately I did not have enough seafood to make those coquilles for everyone. Entertaining is a wonderful remedy for all kinds of diseases, don’t you think? For both, the one who cooks and the one who eats.

Anyway we have this traditional seafood appetizer called “Coquilles St Jacques” which refers to the commercial name of that mollusk but also refers to a scallops mixture dish, cooked in oven, but mainly served in their own shell like this one. There are many recipes for Coquilles St Jacques, literally translated by “Saint Jacques Shell” and this one is my version which has always been a favorite among my friends and family. It is difficult in the US to find scallops in their shells, so I bought ceramics shells. They look like a time-consuming dish to prepare but they’re really not.

In France, we eat the red part of the scallop also (never seen it in the US since they’re not sold in their shell) and that’s what we call corail (like corral, due to its color) that is the genital part of the scallop. I realized that the French tend to eat quite everything, maybe not as much as Chinese…but still.

I haven’t flamed (flamber) anything for a long time, and that really represents the basic of French cooking. So I felt really going back to traditions by just lighting up a match.

Ingredients for 3 large or 4 small

Wash and clean the mussels. Heat olive oil in a deep pot, and add mussels. Cover and let the mussels open. Keep the liquid. you should get about 1/2 cup of mussel liquid. Remove mussels from pan, and remove from their shells. Set aside.

In a pan, heat olive oil, add shallots, brown them, add leeks and cover. Cook leeks until they get soft. Add shrimps, scallops and fish. Cook at medium heat but do not over cook. Save the extra liquid you get from cooking the seafood, and add to the mussel’s liquid. Add mussels to the fish/seafood mixture. Stir well. Add cognac and flame with a match. Add cream, reduce until the cream has thickened. Stir well, add chives. Set aside.

Melt butter in a pot, when butter has melted, add flour and stir well, like if you’re making a roux. Add nutmeg. Add milk and liquid from mussels progressively, always stirring. Add salt and pepper. Stir until the sauce has thickened. It’s the same process as a Béchamelle sauce

Add sauce to the pan containing seafood. Mix well. Fill the ceramic shells with this mixture, if you don’t have any, you can use ramequins or any individual little dish. Sprinkle with breadcrumbs and cook in a pre-heated oven at 375F for about 15 minutes until the breadcrumbs get golden. Serve very hot as an appetizer.

This entry was posted by silvia on September 2, 2009 at 8:51 am, and is filed under Appetizers, Fish/Seafood. Follow any responses to this post through RSS 2.0.You can leave a response or trackback from your own site.