Caponata, we know it’s you – An eggplant caponata a little different 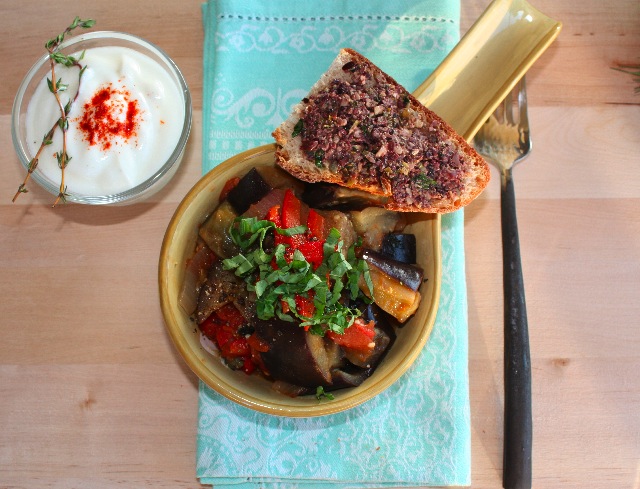 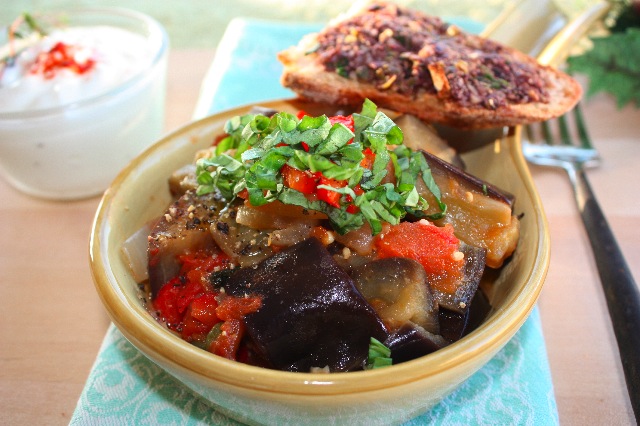 Caponata is very ancient recipe, it’s a typical Sicilian dish with eggplants, onions, celeri, capers, tomatoes, olives. The eggplants are traditionally fried and the whole dish is sweet and sour due to the sugar/vinegar mixture.  Naples has its own version, and probably as many as Italian households. It’s mainly served cold as an appetizer “antipasto” with bread or as a unique dish. My mom being from central Italy has never really made it. She used to make a version of the bandiera or ratatouille in French which is slightly different, it has more types of vegetables than caponata.

You need the beautiful Italian eggplant, not too big, and with a beautiful vibrant purple color. Their flesh is dense and has no seeds. Sometimes, if the eggplant is too big and has seeds, we drain the eggplant water by adding some coarse salt on top and letting it sit for about 30 min, in Italian we have a verb for the whole process that is called “scaricare” or “dégorger” in French.

Instead of adding olives and pine nuts to the caponata, I grilled some country bread and spread some olive pesto, so you can really taste the olive, walnut, garlic paste.  I did not use as not as many tomatoes, I wanted to still get the purply color and not drown it into the tomato sauce. Finally I did not fry the eggplant since they tend to absorb a lot of oil, so I would call this a caponata’s distant relative.

Spread coarse salt on top of eggplants, and let it sit for about 30 min- 45 min to drain the water.

Broil the bell pepper under the broiler, until the skin darkens and separates from the flesh. Let it cool and remove the skin and the seeds. Cut in small cubes. Keep some for decoration.

Caponata is ready, let it cool down, add additional basil and serve with a slice of grilled country bread and olive pesto.

This entry was posted by silvia on May 19, 2009 at 9:01 pm, and is filed under Appetizers, Side Dish, Vegan, Vegetables. Follow any responses to this post through RSS 2.0.You can leave a response or trackback from your own site.