It tastes like the islands – Coconut basmati rice with raisins, walnuts on a bed of pineapple compote 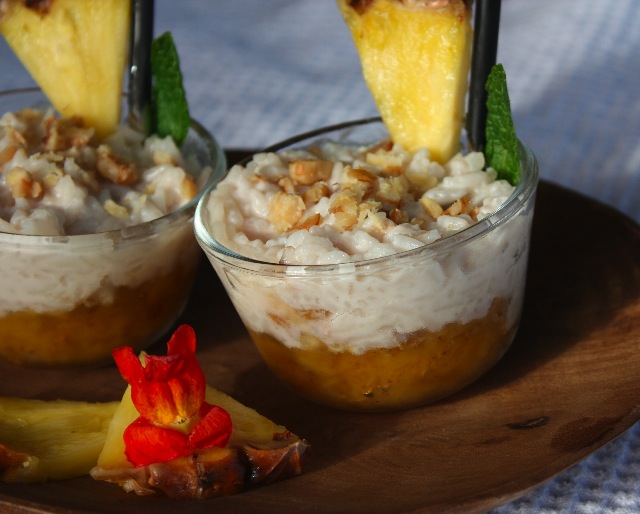 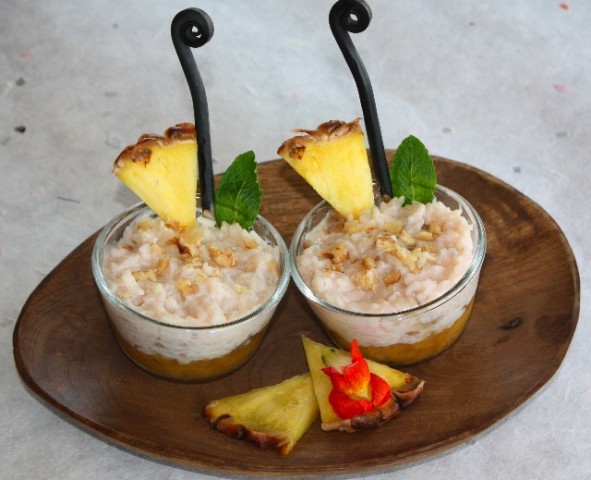 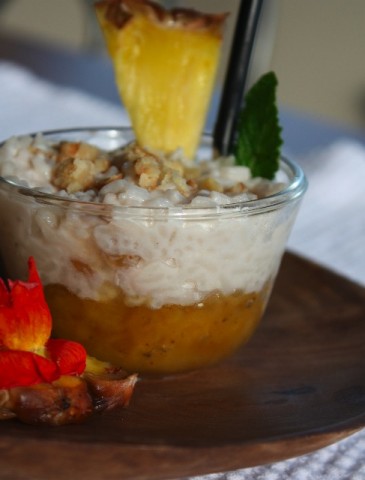 Et pourquoi pas? our traditional riz au lait which is a traditonal French dessert you can find everywhere in France and that kids love. It’s round rice cooked with milk and cream with vanilla flavor. This one got a little more dressed up with raisins and walnuts. I love light desserts, something you can eat in a few spoonfuls and that satsifies you. Here is one. I think with coconut rice, any purée would be great, think about raspberry or mango…it very easy to prepare and an original end to a consistent meal.

Another one of those words you cannot translate…compote, so what is compote?  the dictionary said “fruit stewed with sugar”. I would translate it by “fruit purée”. It’s the same base as jam, made with fruits and sugar but has a lot less sugar than jams or preserves, and has been cooked less time so its texture is not as sticky. We eat compote as is or in yogurt, it can also replace jam, you can taste the fruit much better.

I used mirabelle to soak raisins I brought back from France, it’s a hard liquor made out of little round yellow prunes called mirabelles and grown in Lorraine, the region I grew up, we proudly say mirabelle only grows in Lorraine because of our rich iron soil, but I heard some other regions do grow mirabelles as well, but we won’t tell). I really like that liqueur, not necessarily because my dad produces it, but because it’s so flavorful, and goes very well with traditional “Lorrain” desserts. I found a similar liqueur made in Italy called Grappa at Beverages and More and that can be substitue to mirabelle. If you don’t have any of those rum would be good too.

Another substitution for walnuts would be pistachios or almonds, they have very subtle and distinct flavors and go perfectly with coconut.

for the pineapple compote

For the coconut rice

Peel pineapple and it in small pieces, removing the inside rough middle part. Place in a pot with sugar and cook at slow heat for about 20 min or until the pineapple is soft. Mash wit a potato masher and cook until the juice evaporated. Add vanilla beans. Stir. Let it cool down.

Soak raisins in rum or in any strong alcohol for about 30 min.

Place both milks in a pot, add rice, sugar, cover and cook at low heat stirring frequently so that the rice does not stick at the bottom of the pan. If the rice gets too dry, add coconut milk. 5 min before it’s done cooking, add raisins, walnuts and coconut. Place in the refrigerator for about 2 hours.

Serve in small glasses placing pineapple compote then a layer of rice.

This entry was posted by silvia on March 6, 2009 at 10:32 am, and is filed under Desserts. Follow any responses to this post through RSS 2.0.You can leave a response or trackback from your own site.