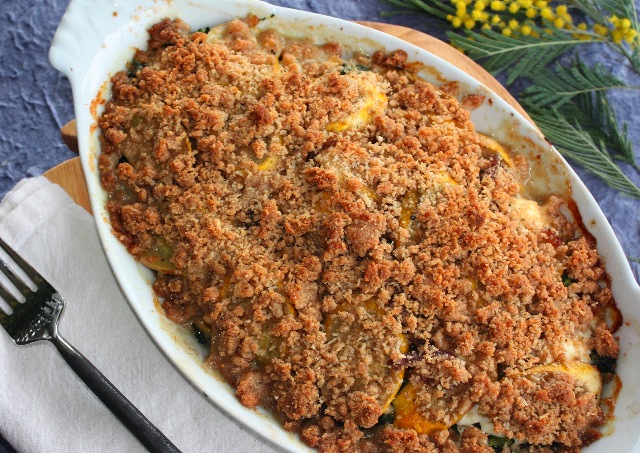 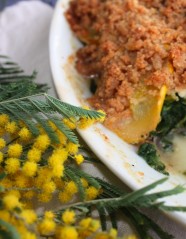 I have been thinking about a savory crumble for a while now, but never had really the right opportunity to make one recently, so today on the treadmill, I have been obsessively thinking about what kind of crumble I could make – crumble was going to be made, but what kind? That was the question.

I realized I had some yellow zucchini I bought at the Berkeley Bowl that arrived at the end of their life and that kept looking at me anytime I opened the refrigerator so those would definitely be used today. Crumbles are so quick to make, healthy and a great way to eat vegetables without the feeling you are eating boring green stuff (for those who think veggies belong to another planet).

I combined red onions and spinach to add some sweet taste to the zucchini and feta and raisins for a mediterranean touch and the result was absolutely delicious. I am ashamed to admit I ate the whole crumble, which originally was supposed to feed 2 – 3 people. You can use green zucchini instead, I like colorful food with contrasts so I thought the yellow and the green of the spinach looked just perfect.

Wash and cut zucchini in slices and set aside – heat olive oil in a pan and add the frozen spinach, cover and let
cook for about 5 minutes or until the spinach are defrost, add salt and pepper. Set aside.

Cut onion in half and slice it in order to get half circles slices.

In another pan (you can use the spinach pan so that you don’t end up with too many utensils to wash), heat up some olive oil (about 1 tbs) add the onions, and cook until they’re translucent and soft, then add the zucchini, salt and pepper. Cook for about 10 minutes until the zucchini are cooked but still firm.

In a crumble dish, or any small pyrex dish would work as well, add one layer of zucchini (keep half for the top layer), then add the spinach, on top of the spinach, add the cream, feta and raisins. Then cover with the remaining zucchini. Top with crumble topping.

Heat the oven at 370F and cook for about 20-25 min or until the crumble is golden color and serve immediately.

This entry was posted by silvia on February 27, 2009 at 11:05 pm, and is filed under Vegetables, Vegetarian - dairy. Follow any responses to this post through RSS 2.0.You can leave a response or trackback from your own site.